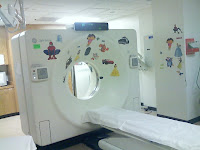 The Electromagnetic Donut Hole Machine at CHLA. This guy took the pics that determined Pablo's prognosis on Sunday morning. Jo Ann and I just booked Pablo's reimaging appointment for 7:30am on Thursday 26 June. That's six weeks from now. The goal is to let the chemo shrink and harden the tumors in Pablo's tummy, making them ideal for surgery the following week. That's our short term-goal: shrink and harden. Turn that 'up' vote into a 'down' vote. Let's go!
Since yesterday was the first Wednesday Pablo had ever woken up in a hospital room, I thought it'd be cool to tell you about a typical Wednesday in our lives. It relates to the donut machine in the pic above...but gimme a minute to get to that....
The first thing you need to know about life in our house (much like yours, I'm sure) is that nothing is ever routine. We try. It lasts for 22 minutes. So, Wednesday being long day for Pablo at Walther School, means that we have to get two kids to school in the morning, instead of one. Grady needs to be in Altadena at 8:10am, Pablo to Hollywood for 9am. The distance between the two schools is 20 miles. LA traffic. You get the picture. Somehow, we make it work, and it seems normal.
When we drive Grady, we're always late. Something about Grady, and something about me...is... Always. Just. Late. But now that Grady's in the last few weeks of eighth grade, we like to get all sassy and break some rules up in there. Well, only one, actually. On the circle drive in front of the school, I pull up and let Grady out before the official drop-off point. He bolts out the car, and runs up into the campus, to make his way to the eighth grade classroom, which is at the very deepest spot on the grounds. I always assume he's hitting lactate threshold by the time he gets there. Anyway, it feels sinister. It feels like we're breaking out of prison, except that it's more like we are breaking him i n t o prison. Not that PWS is ANYTHING like prison, but when you're 14...well, you get what the point... Gee, I hope Ms. Waring doesn't read this.... Now, I just need to figure out how to explain to Pablo when he starts kindie at PWS in the fall that the drop-off point is actually 40 yards away from where I've been dropping Grady!
OK, so, after we drop Grady, Pablo and I jet down the 2 and the 134 and make our way to Hollywood over the dreaded Cahuenga Pass. Our first goal is not school. No way. It is Starbucks (I know, I know) on Hollywood and Las Palmas. This is where the donut connection comes in. This particular Starbucks is also where a four-year-old boy has the highest chance of seeing the one-legged guy who polishes the stars on the Hollywood Walk of Fame ordering a cup of joe, or–and this was a GOOD ONE–the best place to run into Cap'n Jack Sparrow downing a triple venti soy latte. One of the reasons we like taking Hollywood Bv to school is to see all the characters (Chewbacca, Spidey) in front of the Chinese Theater. 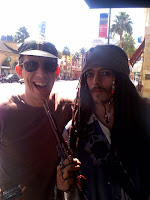 We will never forget the day Pablo and I ran into Cap'n Mr. Sparrow (see above). I know the guy from around the way. Steve Tegel from the Vacation works at that Starbucks, and he introduced me to him a few days before I ran into him with Pablo. So, when we saw Sparrow on the morning in question, he greeted me as a buddy. As in, "Yo, man, what up?" If I ever, ever, ever wanted my son to go, like, "Wow, my Papa is a great guy" it was at that moment. Plus, I couldn't wait to tell Jo Ann and Grady. We love funny and insane stories. This one was a bestseller the minute it came together. Only thing is, the plan was botched when Pablo started shaking and crying and putting a death grip on my hand. It never occurred to me that Pablo might be SCARED of this stinkin' scalawag. I figured that after dedicating 38% of his mental bandwidth to pirates–Sparrow in particular–the chance to meet the dastardly dude would be like getting a serious RAM upgrade. I was wrong. As in taking a wrong turn at Bora Bora.

Suddenly, I was picking Pablo up and soothing him on my shoulder as he cried and shook. Thank the Lord above that the Buuuk sells the perfect antidote to acute piratosis: vanilla milk and CHOCOLATE DONUTS!

Every Wednesday, my day to drive Pablo to school, we stop and get him a nutritious and delicious milk and donut breakfast. It's our joint. It's our jam. It puts a smile on his face. It fills his tummy with wholesome American yummirific vibes. And–this is the part we couldn't have ever predicted–every donut Pablo's eaten in all his years combined cosmically on Sunday night at 2am as he lay strapped down on the sliding bed of the CAT scan machine.

Pablo was already scared outta his mind when the machine started whirring like the trash compactor in Star Wars. His eyes, full of fear, locked onto mine–every parent knows this look–and he said, voice trembling, "Papa I don't like this machine. I'm tired. I just want to go to bed."

For a second, I had no idea what to say. This is where to donut bidness came into my head. I just started rapping about donuts, gesturing at the big, radiological donut he was about to be transported into. Donuts from Starbucks, donuts with holes, donuts at the airport, donuts at home.... Like, whatever I could think of to turn that frown upside down–I was a dancin' fool wearing a 20 pound radiation apron. Suddenly, his eyes widened, and a huge grin appeared on his face!!!! It was one of those situations, like, "What would I REALLY do if I were in [insert scenario]?"

OK, now I'm hungry....and Pablo just came into the room dressed as a pirate, complete with golden earring and eye patch. More synchronicity.
at 10:21:00 AM

Pablo,
Great fight Pablo!
One day we'll be fighting for your wheel. I need a haircut too so let's wait to get one together!
Jeff Morgenthal

Just wanted to let you all know you're in my positive thoughts. Wishing you much love and chocolate donuts!
xox
Helen Stickler

I hope you feel better. You rock, Pab!

I just found out what your family is going through...I can't even imagine how strong you have to be...its got to be very tough, but you have to stay positive...and it seems like you are. I just want you to know that you are in our positive thoughts and that we are praying for pablo, you and your family. I know everything will be OK!!!
Your cousin,
Steve