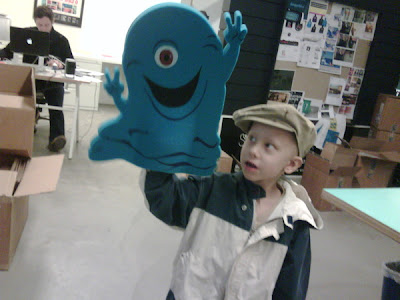 At Dangerbird today with a 'Monsters And Aliens' gift from Dreamworks Pictures—one of the items in the giant basket they sent him while he was in the hospital. He freeeeeked when he saw it in my office.

Pablo is doing incredibly well. Man, it feels great to write those words. As I sit here clicking away on the keyboard, P is sitting next to me on our bed, playing with a raccoon doll and a Simpsons doll that Matt gave him at the office today. It's nearly 10 p.m. and he's still going strong. I'll stay up with him all night if he wants to. That's how truly, actually, wonderful it is to see him happy and energetic and....here...at home...with no hospital check-ins in sight.

This morning, after an early breakfast of vanilla ice cream (he gets his way when he wakes up early with Papa), Jo Ann took P and Grady to Fred 62 for breakfast. Grady had been snowboarding all week, and was planning to hook up with Jimmy there anyway. I was at the office and was unable to join them. A couple hours after we parted ways at home, Jo Ann called the office. Not unusual. Immediately, I could tell that her tone was off. The last place I expected them to be was CHLA. But that's where they were. While P was digging into his Billion Dollar Pancakes, he started to feel funky. He felt cold. And his body didn't feel right to him. He didn't have a fever or any other outward signs of sickness. Jo Ann asked him if he'd like to go to CHLA. He said yes, and off they went.

After a thorough exam by one of Dr M's physician's assistants, and a blood test, Pablo got the all clear. The P.A. said that P's funkiness could have been as simple as his body getting readjusting to the normal rhythm of life. After a year of very precise measurements and medical strategies, a nonspecific, novel explanation seemed fine to Jo Ann. After a couple hours of time at CHLA, she gathered Pablo and his toys and headed for home.

A major upside to going to the unplanned day hospital visit is this: Thursday's blood draw was done today, and P doesn't have to go in tomorrow. That's hugely amazingly cool. And not just in a general sense. Here's why:

Our friend Michael Ross has a fantabulous house in Palm Springs. It's on a country club gold course, has a pool and a hot tub, and is not exactly tiny. He has a vast book and DVD library, and a killer kitchen. It's the kind of place you see in magazines. And we'd begged him to have us out there this weekend for the Coachella music festival in Indio, which is about 10 minutes from Palm Springs. It's a giant music fest, with something like 100,000 people a day for three days. We have Silversun Pickups playing Friday night, and lots of other friends / friends' clients playing. Grady has been going to New Orleans Jazz Fest since he was born, and so has Jo Ann, so they're in their element at this kinda event. I could take it or leave it. Usually, where there at 100,000, I am not. But Pablo and I are gonna go hang for as long as we wanna and then go back to the house. Polly is coming with us, and I am hoping she'll be able to see Morrissey, one of her faves. Only prob is, he goes on halfway through Silversun Pickups' set. She will have a tough choice (haha). After a year (we can call it a year, right? You'll give us that?) of Polly living and breathing Pablo's treatment, walking out on one of the bands that helps pay her salary to see one of her all-time favorite artists is wildly appropriate, acceptable and effin OK!

You know we'll have lots of stories and pics posting here throughout the weekend.

A snapshot of our general state of mind:

It's been hard to catch up on life. I feel like I can't finish anything. There's always more to do. Seems like every hour I've lost to Pablo's treatment requires several hours of catch up at the office. Maybe it just feels that way. The feeling of fatigue has not left me or Jo Ann for weeks. I got on my bike this morning and I just did not have it. I don't think even a leisurely bike ride beside a granny would have been in the cards for me.

An efficiency expert could smooth out my work flow, and would probably tell me to sleep for six straight days to get my optimal energy back. But that isn't realistic right now in my personal or business life. Jo Ann and I are both expecting this weekend to be rejuvenating, relaxing, and—can I say this?—FUN.

Monday, we'll be back at CHLA for a GFR test (the radioactive kidney test that takes like six hours). Tuesday morning brings another abdomen and chest CAT scan. That's pretty damn quick and easy. Then, with those results in the CHLA computer system, we see Dr M Tuesday afternoon for our six week exam and parents' meeting. We're all so used to goals around here, so I'm gonna keep it rolling: please set your thoughts and intentions on Pablo not only having an off-the-hook weekend, but sliding into these two tests next week like a champ.

But for the next five days, we're like John Cougar Mellencamp: R.O.C.K. AND NO C.H.L.A.!

this makes my night! thank you!
much love and light and prayers and good energy!
enjoy your FUN this weekend!

Glad Pablo is feeling better and hope you guys have a fun and relaxing weekend. Just saw Morrissey in Dallas on Friday; great show, don't want to pass that up JoAnn!

Got room in the car? I think P needs his fav nurse around just in case! :)
Have fun guys.....you deserve it!!
XOXO Danica

Have a great time this weekend!!!!!

to the castelaz famely katie& i are praying as our friends & family are doing.jeff you &joann must become one &you will gain strength.give pablo a hug& kiss from grandpa&katie jeff call when you have a chance love dad katie