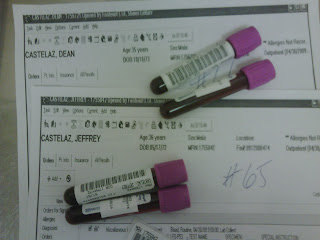 I'm at CHLA without Pablo for the second day in a row. Strange. Today, Dean and I are here to have our blood drawn. Dr Mascarenhas is interested in digging deeper into the cancer history in our family. This topic came up in our meeting yesterday regarding the next phase of Pablo's treatment (Jo Ann and I are still reviewing our options and will talk about it here when we feel ready).

The family thing is a sidebar - the results wouldn't have bearing on P's treatment - but there's something to be learned from it if one of Dr M's theories proves to be true. He is looking to see if Dean, Pablo and I all carry the P23 gene, which is a common thread in cancer traits among first degree male relatives.

A bit more background on our family's history with cancer - specifically tumors. You know that our older brother, Scott, passed away in 2004 at age 39 after an 18 month battle with cancer. I've talked a lot about that. We also have an older half brother, Bill, who is now 48. He is our dad's only child from his first marriage. You know how people were back in the late '50s. Wild. Into motorcycles and bowling and gettin loose I wasn't there, but I've watched enough 'Happy Days' to know.

Anyway, in 1973, when Bill was 12, he had Glioblastoma - a giant tumor the size of an orange in the left side of his brain. It was removed and found to be benign. Bill received 40 radiation treatments and returned to normal life. The tumors never recurred but Bill suffered a series of three strokes between 1981 and 1993. His physical abilities never fully recovered.

That my brother and my son both had cancer was categorically scary to me. It's had me thinking - a lot. Earlier in Pablo's treatment, Dr M felt that P's cancer was unrelated to Scott's and we didn't talk much about it. Because we didn't grow up with Bill (he lived with his mom and is 11 years older than me), I never even thought to mention his brain tumor to Dr M in our earlier family history discussions. In fact, I didn't even think to mention it yesterday. Jo Ann said it.

The fact is, Scott was the keeper of these kind of facts in our family. He and Bill were only four years apart, so Bill was a true older brother to Scott. When Jo Ann and I told Dean about this, he called our Dad back in Milwaukee and got some of the facts. Next call was to our uncle Donald, then Bill's mom in Kohler, WI. Within 15 minutes, the dude had the whole medical history nailed. Amazing.

So, today, after the healing circle, we dropped in at CHLA to start this tangent of our family's journey. Out blood will be frozen until Monday's Fed Ex shipment to the lab that does these studies. Next time P has a blood draw, they'll pull two extra vials and send his to the same place.

Fascinating. Scary. Let's see where this leads us.