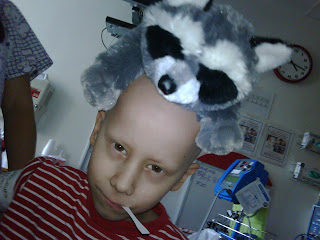 Pablo bought a raccoon in the gift shop. His goal? To scare the heck outta Papa. It worked! He came runnin at me with that thing and I jumped!

Mommy's at home boiling eggs for our coloring party later today. She's also strategizing with the exTerminator on how to trap the vermin in our attic. The dude asked her to stand watch while he moved the cage into the attic. 'Close your eyes and wave your arms in the air,' he said. 'If the raccoon jumps out of the attic it'll run right by you and go out the front door.'

Jo Ann's response? She laughed and went downstairs and bolted herself in our room! What any sensible person would do.

The raccoon situation is, to keep a good sense of humor about it, like, something to file in the 'Don't We Have Enough On Our Plate?' Department. The past few nights, I've been so zonked, I would've let the beast sleep next to me. Thankfully Acacia and Josh from our office have been extremely helpful on Mission: Raccoon.

Pablo and I went to our secret play hallway (the administrative area of the fourth floor) and played hide n seek. It was fun. Every time he counted, with his eyes closed and his forehead against the wall, I stood and watched him until he said 'eight.' Those moments were so precious. Much more important than actually finding a good hidin spot.

P's been laughin + runnin + playin all day. He really is ready to bust outta this place. From our point of view as parents, just judging his energy and activity level, he is 120% better than the day we brought him here. We are certain we'll be heading home Monday.

Earlier today, I saw the guy at the front desk making out the security pass for the Easter Bunny. So I know homie's headed over here to drop his sweets n treets for all the boys + girls. Ending our FINAL - I SWEAR - stay at CHLA with a joyful holiday is a gift in itself. We'll go home on a high note and begin Pablo's ascent back into the normal life of a healthy five- (nearly six-) year-old.