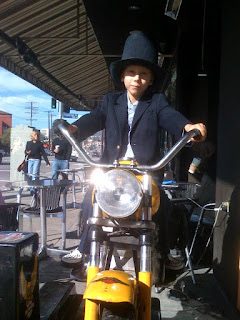 Sharp dressed man on the Harley outside Wee Soles on Sunset Boulevard—two doors down from the soon-to-populated Dangerbird offices.

Today is Pablo's half birthday. He's five-and-a-half. He was born on the Summer Solstice (June 21), and today is the Winter Solstice. We don't, like, celebrate half-bdays, but since his is so easy to peg, we made a big deal about it in our morning convo. Today has been a totally normal Sunday for us. Actually, better than normal: we all slept in—even me and Pablo, a rare occurrence for us. We met Juliana for brunch at Town and Country. We went for their yummy pancakes, and P decided he wanted scrambled eggs and toast instead. Can't remember him ever not ordering pancakes. Might have something to do with his passing the 5.5 year mark?
After brunch, we went to Wee Soles to look for a new pair of shoes. P fell in love with black-on-black creepers by T.U.K. (same company that made this black-on-white creeps). The store was out of his size, so we ordered them. It's worth the wait: he loves creepers, and T.U.K. makes a great pair of kicks.

From there, we popped into Pazzo Gelato next door. Fred bought a round of gelato. Pablo had two mini bowls of vanilla. He chowed down on that stuff. I know why: it's fresh and they use real vanilla. It's good to see a kid who likes the authentic taste over the synthetic stuff. After brunch dessert, we swung by the video store up the block from Fred 62. Grady watched 'The Fast And The Furious' last night and wanted to rent the sequel, which is not yet out on iTunes. He's in love with cars—a new fascination that's spawned from playing the Midnight Club video game (he loves that you can customize each aspect of your car in the game), and the fact that he is getting closer to driving age by the minute. Jo Ann took him driving in my Prius yesterday afternoon. He did very well. She was blown away by how well and how naturally he drove. My Prius isn't the car Grady is after though. For the past week, he's been hounding me about my 1970 AMX. Something about 'can I have your car when I get my license.'

It's weird. The conversation about the AMX always ends really quickly. I just say 'No' and change the topic! Seriously, I'll be happy to accompany Grady in that car any day. It'll be a joy to share it with him.

Jo Ann is thinking today will be P's last day out of the house for while. His white blood cells are beginning their downward movement, and won't be on the rise for at least another week. It was fun to be out in the sun and the crisp (for LA) winter air. A couple hours on the outside will make the upcoming homebound week a lot easier to accept.
at 6:32:00 PM