A Shot In The Dark 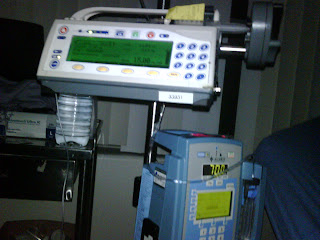 The title of this post isn't referring to the banal post-Randy Rhodes Ozzy Osbourne single, or the accompanying 'metal girl from mall turns to witchy woman' video. We're actually sitting in Exam Room L in complete darkness. Like, Ronnie James Dio kinda darkness. The only lumens up in here are comin from the glowing L.E.D. screens you see in the pic, and the Flashlight apps from Fred and Jo Ann's iPhones. Incredibly nice actually. Fluorescent tubes sucked in school, and they suck in this 10 X 12 room which is populated by P, Jo Ann, Fred, Polly and me.

Our usual December 28 ritual would have us sitting over a six million calorie feast of Cajun food at Jacques-Imo's on Maple Street in New Orleans - with 40 of Jo Ann's oldest and dearest frenz 'n fams. But nothing this year is usual. We'll be back at Jacques-Imo's next year, and we'll appreciate it more than ever as we remember how Jo Ann and I spent our bonnes anniversaries en 2008.

Tonight, we improvised the bday celebration. Before we dropped the lights and dropped the ante, Scott and Helen came by with three thick hunks o' cake from Alcove on Hillhurst - and a candle - so we could sing 'Happy Birthday' to Mommy. You can't actually burn a candle in a hospital, so Fred and Scott torched up flames using their Zippo lighter apps. A sweet moment in this, um, Wechseljahre ('transition year' as translated by Herr Fred Gillich).

Gotta run. Our room is ready!