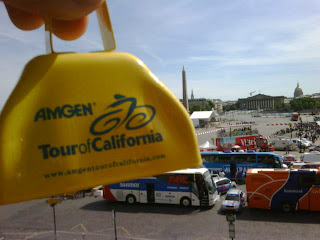 The Tour de France peloton is nearing Paris. If you don't follow cycling, Lance Armstrong will step up onto the podium in a couple hours and take the third place crown. Incredible for a man who is 37 and was out of bike racing for nearly four years. He rode an incredible race - especially yesterday on the vicious climb to Mount Ventoux. All of Lance's rivals tried to put him out of business, and none of them succeeded. He responded to every surge and attack, nullifying the efforts of dudes 10 or more years his junior.

We are on the giant, ancient balcony of the Automobile Club of France, a deeply swank men's club that is staffed by waiters in black tuxedos. The balcony looks out over the Place de la Condorde, a spot that allows us two views of the riders on each of their eight laps through central Paris. In our field of vision is the Eiffel Tower (we went to the top this morning) and eight other major monuments I can't name off the top of my head. Jo Ann and Grady are hangin in the shade, so I can't ask her for the facts. All I know is, most of them are well over a century old, and most are multiples of that.

We packed Pablo's Tour of California cowbell. You might recognize this from the photo where he's on my shoulders, leaning on my head, waiting for the peloton to come over Angeles Crest into the Rose Bowl basin. You know, this one: 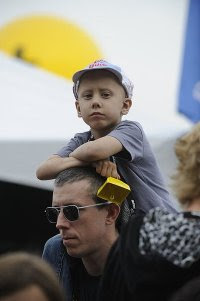 The cowbell you see today's pic, with Paris landmarks in the distance, is the one you see in Pablo's hand in photo above. He looks about as happy as Grady does now, waiting for the peloton in the most famous cycling race in the world. Pablo lost his mind when the riders flew by us on the ToC finish line. I know Grady will lose his today—once the riders hit the Champs-Elysees circuit.

We miss Pablo like hell. It hurts. It burns. It stands us up like stiffly starched shirts at some French dry cleaner. The other thing is does is make us appreciate every moment we've got on this trip.

I'll tell you what else we're gonna appreciate: ringing the f*** outta this cowbell and bringing Pablo's spirit into this sacred Parisian tradition.

What an unforgettable experience for all of you..

Ring away my friends.Ring away.

It reminds me of ZuZu Petals...."Every time a bell rings, and angel gets his wings...."