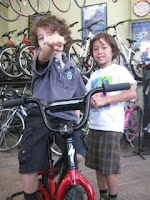 Pablo and Riley and new red bike (read on for details)
In the middle of last week, I got a phone call from Hrach, the owner of Velo Pasadena. Not unusual–I talk with Hrach half a dozen times a week. We're always working on one of my bikes, planning a ride or talking about our cycling club–Velo Pasadena Cycling Club–which Dangerbird sponsors.

But the voicemail he left on that day was oddly urgent. "Call me back right away," he said. Not his usual laid back self.

When I returned the call, he told me that Jor Mardini and some of the other guys on the club's masters racing team had heard about Pablo and wanted to dedicate our weekly Sunday morning club ride to Pablo. They wanted to do it this Sunday, and could Jo Ann bring Pablo and Grady down to the end of the ride for a little reception, so people could meet them, say hello, and make the personal connection? The answer was 'yes,' and the plan was set. Another amazing moment in a growing string of amazing moments. I remember thinking, 'I'm starting to be OK with being on the receiving end of goodness. We're going to accept all this love and support. And when this is all over, we're going to give it all back, wherever it's needed.'

One other thing Hrach mentioned was that many of the guys on the racing team were ready to write checks to our preferred charity, and were going to donate all their race winnings for the season as well. We asked the guys to write their checks to the Pablove Foundation, our new family foundation (more on that later).

So, the first Pablove Ride went down at 8 a.m. Sunday 8 June 2008. About 100 riders–from VPCC, and another local club Pasadena Athletic Association (PAA)–spun in support of our little boy, in support of hope, in support of being conscious and open about the fact that cancer is something we can fight...and win.

We want to thank Hrach and his family, Matt Barnes, the president of VPCC, Joe and all the VPCC racers, and EVERYONE WHO RODE WITH US, and to ALL of those who DONATED cash and checks to the Pablove Foundation. We raised $1,200 on a Sunday morning. And that is money we will put to good use, as we step into our newest new role of utilizing our bodies, minds, Rolodexes and foundation funds to help with Wilms' Tumor research and all kinds of childhood cancer causes (more details on our mission statement later).

At the end of the ride, Jo Ann and Pablo were at the shop (Grady was with Jimmy). They handed out PABLOVE bracelets to all the riders (more on those later). Hrach and his wife Nevrik walked Pablo into the store and allowed him to pick out any bike he wanted. He chose a sweet dark red Specialized dirt bike with training wheels. (If I'd have known this, I would have directed him to the TIME frames department!) His bike has a 'good guy' and a 'bad guy' character printed on the crank. He informed me that he is the 'bad' guy, and I am the 'good' guy. He rode it all over the store, with his pal Riley Nice (our friends Steve and Emilline's little boy). No toes were hurt. They had a great time. Hopefully they created a memory that will endure in their minds for their many years ahead.

A little bit about why I love the sport of cycling, and why the code of the road has me in awe:

Cycling is a deeply romantic sport, even at the amateur club level where my friends and I reside. At the European pro level, it's said that the peloton (large group of riders) is a perfect microcosm of society at large. There are rules, traditions–mores–that guide the group along. The 'group' in pro level cycling can include riders from a couple dozen different nations. Many of these guys have been training to be pros from age 13, and have only ever known cycling, competition, intense training and intense rest. The code of honor among the peloton is the only set of rules they know. If there's a crash, the entire peloton slows down until the fallen riders have caught up; same goes for pee breaks (everybody asks about that one). What's interesting is that riders from competing teams often assist one another to meet mutual goals in a race. If two competing riders fly off the front of the peloton, careening toward the finish line, they will often take turns pulling (blocking the wind for the other guy). As the line approaches, one of the riders might offer to let the other take the win. If a rider betrays a such pact, vicious rivalries can erupt. Rivalries are a given. And winning doesn't quell anyone's anger. Sounds like international politics!

At our level, crashes, potty breaks and rivalries are hardly factors. Most of us only know each other on the bikes. We get into great conversations while riding. We talk about all kinds of stuff, including lots and lots of bike tales–the two-wheeled cousin to the fishing tale. We take turns pulling so that others can pedal easier for a while. We keep one another safe on the road by screaming out all kinds of coded warnings denoting the positon of cars behind/bedside/oncoming. We point to potholes and other refuse in the roads, to help riders behind us to stay safe. We help newer riders get up or down hills, and politely and supportively give them tips on bike handling or riding form (I got a LOT of this kinda feedback last season, and verrrrry much appreciated it). Cycling is one of the ultimate self mastery pursuits. You can ride the exact same gear as the guys in Tour de France, and you can ride the exact same roads as Lance Armstrong (ie, the mountains I wrote about last weekend are the roads he rides when in LA). It's a thrill that is hard to get with, say, football or baseball. Kind of difficult to field an NBA-style b-ball team, on a regulation-size court with refs, etc.

Anyway, I always joke that when we see one another in street clothes, sans helmets and glasses, sometimes we don't even recognize each other. It's pretty funny. The cool thing is, when we are out there riding, it doesn't matter who we are in the world, what we do for a living, what kind of car we drive.... Especially comforting in Los Angeles. It's just about the two wheels we're floating along on. I love it. That's what keeps me riding every day.

Yesterday's ride brought all of this together in an intense way for our entire family. The 100 men and women who rode 25 miles in honor of Pablo put their 'get well' wishes into motion. Think about it - 100 riders X 25 miles = 2,500 miles! That's almost a coast-to-coast ride! Thankfully, it took us only 90 minutes.

So, you can see that this theory about cycling being a microcosm of society really does hold water. Maybe I could push it one step further and offer that society could glean something from the codes and practices of amateur club cycling. Assistance, connection, competition, endurance, nurtrition, rest, family.... Hmmmmm....

Here are some pictures from the ride, courtesy of Lon Bender: 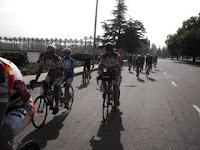 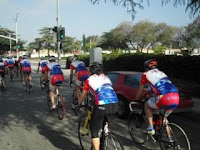 End of the long pack of riders 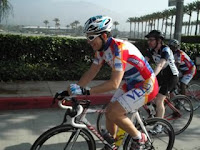 Me and Tony Hoffer (black helmet) on Huntington Boulevard flying by the Santa Anita Racetrack
at 7:02:00 AM

Hi Jeff, your neighbor, Jennifer Del Barrio here. Just checking on how Pablo is doing. By the way, I didn't recognize you on the bike the other night, so if I seemed only moderately friendly, that's why. Maybe it's your new mohawk? Anyway, always thinking about you and Jo Ann and Grady and of course Pablo. Glad to see what a star he was at the Dodger game!!!!