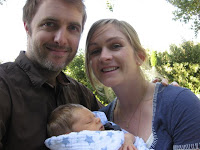 Peter + Lennon + Brie
We've been talkin bout the Pablo Scenario as if it were the only unexpected hospital run of the year in our circle of friends. That's not exactly accurate. After hosting a killer Saturday afternoon BBQ at their casa on May 10, Peter and Brie made a run to Cedars-Sinai in the wee early hours of Sunday.
Their cannonball run was the joyous kind: the little boy in Brie's tummy had a special Mother's Day gift: himself! This beautiful boy we now know as Lennon wanted out on this specialest of all days for Mommys, even if it was two weeks before the projected D date. For those of us who were hangin out in the Los Feliz section of Planet Earth the day before, Lennon's arrival was an almost surreal surprise. We'd been with P&B til the early evening hours, with no indication a baby was about to drop. It still amazes me how our kids leave the womb: when they want out, they want out!

As I write this, a memory is coming up. I didn't even see it when it was happening. As I write today, it's clear to me that it was very, very difficult to tell Peter that Pablo had been diagnosed with cancer. It was precisely one week after Lennon's birth. I felt our tough news about the frailty of a child's body and life would put a cloud over the joy of Lennon's week-old life.

Of course, this was all in my mind. Peter is my best friend, my brother, my partner in this life mission we call Dangerbird. Over the years, we've become one another's safety net, and have an honest-to-God pledge to talk to one another about "stuff" as it comes up, without delay. It works for us. If we were younger, single and possibly in a buddy flick, we'd be the Bill and Ted or the Harold and Kumar or the Stone/Parker of the east side. I've been deeply excited for Peter to join to Papahood Guild. He's a dude who was made to be a dad.

Two weeks on, it's clear to me that those thoughts were just a fleeting thing. And, as I said, barely remembered even having the thought. I feel good writing it here, because, even at this subconscious level, it's part of the experience we've had.

You may recall from earlier entries that Brie is a doctor. We call her allllll the time to ask questions about medical stuff. We always apologize for bothering her with a mediquestion. And she always tells us it's all good. Brie is one of the most intelligent people I've ever met. Her sharpness is wrapped in a bow of the sweetest, most down-to-earth delivery you could imagine. She has a way of explaining gnarly and/or complex medical bidnezz in a down-to-earth manner, and listens in a way that I could only aspire to.

So, when we were sitting in the ER with Pablo sleeping on one of us, we Blackberry Messengered Peter with the news that we were going in for a CAT Scan. It must've been 2 a.m. Peter'd been at my birthday dinner hours before, and had asked me to keep them up to date. We knew they were either awake at that hour, or would be soon, since Lennon would be up in the night to feed.

Throughout the night, we emailed and BBM'd with them. Just knowing they were out there, awake and aware of our moves in the hospital made us feel better. We wouldn't be able to talk to our other friends and family til the morning. So it was the four of us, a mile apart, with our little babies at our sides, careening through this odd night.

When we checked into our room, the Los Feliz hills filled the view out the window. If we'd had binoculars, we could've seen P&B's house. No coincidence. Small things like that bring you comfort.

After the sun rose, Peter sent out an email to our staff and close friends, breaking the news to them. He immediately offered to be the communication hub, so that I only had to talk with him, and so that everyone in our world would have the same, accurate information to pass down the line. I've said it in earlier entries, and I will say it again: it's unreal how the terms "best friend," "brother," "partner" come to life in times like these. This is the kind of situation that faith was invented for. It's also the type of scene where the true bond of friendship gets to color the world. We've seen this with alllll of our frenz and familia.

Peter made daily visits to the hospital, always calling ahead to get the coffee order. Brie and Lennon stayed home, to keep his newborn body out of the germ-infested air. She sent her love and empathy on every trip with Peter. We felt it, and could feel life changing in those moments. We knew she'd have been there if she could. I imagined Brie turning up in her white doctor's coat, with her "Dr. Brie" badge that I always ogle when I see her coat hanging on the bannister at theri house, checking Pablo out–a familiar medi-face in a sea of unfamiliar grills.

One of the many family plans that immediately fell off the schedule with the utterance of the word "cancer" was our summer vacation. We had a big vacation planned–a week in August with P+B+L at their house on Lake Winnipesaukee in New Hampshire. (Yes, that Lake Winnipesaukee...) His weekly treatment schedule makes it impossible to fly across the country. It takes him a day to get the chemo, at least another day for potential side-effects to wear off, and we'd have two days of flying to and fro. That'd leave three days to chill. Not worth it. Plus, his compromised immune system should not be on a yucky plane for seven hours.

Two summers ago, P&B got married in the woods surrounding their house. We spent an idyllic week there, water skiing, jet skiing, rafting, eating great food, having the best time with both their families and several dozen friends. Oh, and for us Angelenos, breathing the clean air didn't suck either! It was such a great time in our lives, and the idea of going back with a 14-year-old Grady and a five-year-old Pablo was beyond exciting.

One day, Peter came into Pablo's hotelspital room. He told us that he and Brie would like to host Grady for a week this summer at the Lake. We're still processing how cool that is, AND how little Peter and Brie know what they're in for by offering our little man a VIP Pass to the land of endless water skiing, swimming, jet skiing, rafting, and E A T I N G lololol!!!