Editor's Note: If you read this post earlier, please re-read. We realized this morning that the entire middle section of the post was missing.
This is like our version of MTV: You Hear It First. Considering that Jo Ann and I met on a music video project where she was the exec producer (ie, the person who got to tell everyone what to do), and I was the manager (ie, I went down to the 'hot girl' casting session and ended up meeting Jo Ann), this is a major moment for our family. Video is where it all began for us.

This moment is exxpecially cool cos Grady powered through all this cancer madness and sadness and craziness and created a work of art, featuring his classmates' band The Conscripts. Just like the very experience we're documenting in this blog, Grady pulled together a village of supporters and a very special mentor, Scott Henriksen, our friend who has known Grady since he was born. Scott and his wife Helen McCusker (many of you have met H, one half of our meal coordination team–more on her coming in Saturday's episode) have been friends with Jo Ann for something like 20 years. That's O.G. for realz.

One of our family's fave pics ever is this one–S&H's gift to Grady on his first bday, back in the 9-5. So, you can imagine what a trip it was for Scott to get a call from Grady asking if he could shoot a vid for him! 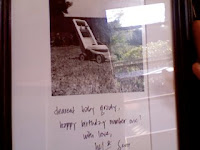 Scott is one of the sickest cinematographers out there (and the hubby of Helen McCusker-more about her Saturday). He shoots all kinds of commercials and videos that we all see on the Super Bowl, Olympics and all over TV. Scott has a photo in his house of him and Depeche Mode singer Dave Gahan, in a lightbulb-covered coat , from the Anton Corbijn-directed "Barrel Of A Gun" video shoot. That's about as ridonkulous as you can get if you ask me. Anyway, Scott was Grady's mentor on the the project, and it was sweet.

Grady, Jo Ann and Scott shot the video the afternoon of my bday (May 17), just hours before Pablo's diagnosis. It was hotter than hell that day, and they got all their shots and made it home in time for dinner. Totally pro, and no one had to sign an overage authorization.

When the C-Bomb dropped, one of the first things we thought of was, "How are we going to help Grady finish his project?" Jo Ann was his producer on the video, in addition to being the producer of his life, so was intrinsically tied to the project. She wasn't just his "mom" making sure his homework got done. She was working for Grady, and helping him realize his vision. A total dream come true for Jo Ann, who built a storied career doing this exact thing for other directors. The chance to be the producer for her own son was the biggest thrill of her career.

As the word got out out about our family's scenario, our friends Tracy and Michael Blum, parents from Pablo's school, offered to help us in any way possible. As Jo Ann read Tracy's emails offering help with "anything you need," she realized that this was just the time to call in the big favor from Tracy and Michael and their company, Riverstreet Productions. They own a full service production and post company, and have all the goods to help Grady to finish his video. Oh, and they are the sweetest, coolest people ever.

So here's how it went down: For three days after school, while Jo Ann and I were in the hospital room with Pablo, Grady got dropped off at the Riverstreet offices in West Hollywood. The first day, Tracy and Michael's assistant, Mike Pistello (THANK YOU MIKE!), schooled Grady on the inner workings of the editing program Final Cut Pro. Within four hours, Grady was manning the board, and making his way toward the awesome clip you see above. We had no idea how long the edit would take. After two days of work, Jo Ann asked Grady if he wanted her notes on the edit. His response? "No–the video's done." And that's the edit you see here.
Jo Ann has made hundreds of videos. The editing process NEVER takes "a few days" with no comments! This is hilarious!
at 8:18:00 PM

When you got it, you got it. GREAT video! The last time I attempted to shoot a video I turned the camera ON instead of OFF and put the camera on its side on the family room coffee table.

You followed the oldest rule in the book - leave 'em wantin' more!