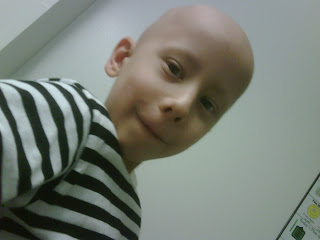 Tony Hoffer and I got off the plane from Austin at 8:30 this morning. We had a great, productive time at the festival - saw all our bands, hung + laughed our asses off with Peter Walker and met with lots of peeps from England and Australia. We ate like dormitory residents and got a total of, like, eight hours of sleep over two nights. For two guys who don't imbibe, we both had soul hangovers from all this activitising.

When Tony dropped me off this morning, I took a nap, and came straight to CHLA to relieve Jo Ann. She's been on duty for two days without leaving this building. After two days of nonstop Austin action, my best contribution to playful Pablo's Sunday is to lay in his bed and allow him to jump on me, punch me, and snuggle with me while he watches a movie and we have quasi-convos between disco naps. We've been watching a 'Sponge Bob Square Pants' DVD for - seriously - like four hours. The dudes who produce that show are clearly insightful and benevolent people. This is the longest horizontal integration I've had in four days.

That song is an immediate #1 hit. Request it at your local radio station or roller rink.

Love that song. Can't wait till the words are "it's over, it's over now". And Pablo is dancing to it.

Can't wait to celebrate the end of this!!!!! Yahooooooo!
Jenefer