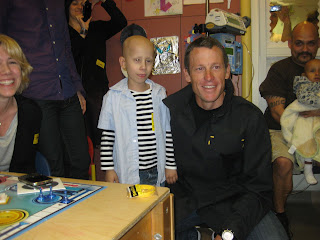 I can't even think what to write in the caption for these pics. The smiles say it all. 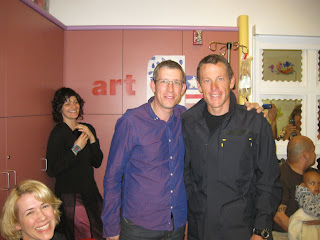 When I put my arm around Lance, it felt like he was made of granite. Seriously. That's not just mancrushination—it's true. I will not forget that feeling. Ever. 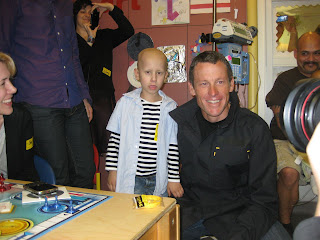 I like this photo cos Pablo is looking at our camera, being operated by one of the Child Life Specialists from the play room and Lance is looking at his official photographer Liz Kreutz and the TV/photogs of the pres corp. 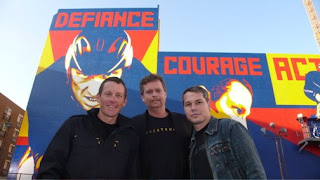 Lance with Nike CEO Mark Parker and Shepard Fairey. That's Shepard's stunning 'Defiance Courage Action' mural in the background. He is giving us the much-smaller version off the side of his building in Echo Park after it runs its course. So excited. We're going to hang it in the back yard at Dangerbird. We have the perfect spot for it.

How do I start to describe our Livestrong+Pablove=Pabstrong Saturday? The whole day was amazing. I woke early and did 50 miles in the San Gabriel mountains with my Piero Giramonti and Michael Tedesco. These guys have been tireless supports in my life—friends who've pedalled thousands of miles and climbed tens of thousands of feet of mountain roads with me before and throughout Pablo's treatment. Jo Ann woke when I did. Unusual, but she had to flush Pablo's port, connect the antibiotic pump, and be sure everything was smooth.

At 11 a.m., Polly came over so Jo Ann could go to the Eulogies video shoot downtown. Eulogies is my partner Peter's band—they're about to leave for an unending tour, so this is Jo Ann is our video commissioner at Dangerbird, so while she had plenty of work at home, she had to punch the clock like Fred Flintstone, and check in on the shoot. Our friend Scott Henriksen directed (Helen McCusker's husband—many of you know her from your food and blood coordination), and Grady was the Director's assistant. I wasn't able to attend, but Peter, Jo Ann and Adam Harrison from DB all told me that G did a top-notch job as Scott's assistant/slate guy.

After my ride, I wolfed down my post-ride meal, showered, and headed to the Montalban Theater in Hollywood with Polly and Pablo. We went there for lights, cameras and a bit of different kinda action. Last week, Nike and Livestrong invited us to be filmed for a Livestrong TV / web commercial. Instead of showing Lance on a bike or whatever, they're doing 'people from the front lines of cancer.' That would be us. Pablo wasn't too interested in the TV cameras or the idea of sitting in a tiny room under hot lights, so I did it by myself. That was fine with me. I knew that I didn't want him in the room for part of it anyway. I had things to say that will not be appropriate to say to him or in front of him until he's much older.

There were four people in the room—director George Hickenlooper, two cameramen and an audio tech. 60 seconds in, we were all crying. It was ill. I say that cos they were there to get authentic s**t. I assumed by their tears at several points of the interview that they got what they needed. The energy in me that would normally be nervousness in a situation like that transformed into calmness and clarity. I was able to put together words and sentences that conveyed the horrifying forgotten moments, the gradual numbness to anything in our lives except Pablo and his well-being, and, of course, the incredible grace and serenity and power we have found in ourselves, in our family and in our community. We sat in there for what seemed like an hour. So we covered a lot of ground. I talked a LOT about our community—if you are reading this, that means YOU!—and how the Pablog has had over 135,000 page views since we wrote the first post on May 18 2008. George was extremely gentle and nurturing in his interview direction. Great questions and great care in how he phrased each sentence.

From the moment I met him, I could tell that George was a very talented dude. He sat right in front of me, with my left knee touching his. As I spoke I looked him in the eyes. He did not flinch once. From writing this blog and speaking about Pablo's cancer journey to all of you and at CHLA events, I realize why God gave me these talents. I've put them to good use for years, but never really felt like I'd found the precise purpose for those talents. Communication from the front lines about the darkness before dawn; the watching Pablo as he sleeps wondering...and wondering...and wondering; advocating for P on every level every day about everything (I spoke a LOT about Jo Ann in this realm); the absolute need for Jo Ann and I to have self-care and self-respect during this time; the soul-pummelling pressure of working 14-16 hours at the office and then pulling the overnight shift at CHLA; my misapprehension that the lightning bolt of cancer wouldn't strike twice in my life; and many other topics I can't recall.

After the taping, I rode my bike to CHLA and met up with Jo Ann, Polly and Pablo. We met lance in the fourth floor playroom—a room that's become P's home away from home. It was so natural and wonderful to meet him in our environment. It was so cool. He walked up to me and said, 'Hey—we talked on the phone!' As he shook Jo Ann's hand, he said, 'Hey Mom!" She swears it was because she wasn't looking. Lance is known for incredible focus. In a room full of screaming kids, we had a 10 minute convo as if we were in a private place. He also turned Pablo from a cranky mood to sedate just by asking, 'Hey Pablo, you wanna take your picture with me?' Without hesitation, Pablo flipped his frown upside down and walked over to Lance. He put his arm around Lance's leg, and the shutters started flying. I'll never forget that....There was a press corp covering the event, huddled in the middle of the play room as about a dozen cancer kids and their parents waited their turn to meet the man who beats the odds and has lived his dream for the past 13 years. After the meet + greet P, P and J A went home and I went to the ride start area.

The ride itself was fun. Very short—only two miles. We all wore street clothes and regular shoes. Strange. I hooked up with Ben Harper at the start line. Our friend Justin Meldal-Johnsen, one of the most upstanding dudes I've ever met and whom I'm honored to manage, is producing an album with Ben at the moment. He was meant to come on the ride, but, like so many people lately, is sick as heck. He rang Ben prior to the ride to let him know I'd be coming by to say hi. Like so many people JMJ introduces me to, Ben spoke to me like an old friend from the jump. We rode all the way down Sunset Boulevard talking and laughing. He heckled Lance at the start line—joking about racing him. He and Lance are dear friends. Lance called him 'a brother from a different mother' in his introduction of Ben's performance at the post-ride Livestrong event at the Montalban Theater.

Ben's a great guy, hands down. His son Ellery was at Walther School with Pablo during P's first year there. I'm not sure we ever met, but Ben swears we did. Ben hadn't heard about Pablo, and was shocked when I told him. Have to say, he took it pretty hard. I could see his kids' faces flash in his mind. Then he said that he couldn't help but wonder how he'd feel if one of his kids were in Pablo's shoes. Prior to this journey starting 10 months ago, Ben's words and energy would have stopped me in my tracks for a couple days. Today, that 'what would I do if...' sentiment is something I deeply respect coming from others, but I can't hold onto it too long.

At the theater, I realized there was something else really powerful going on: I was standing there with many of my core cycling friends, sharing the experience. The experience of being around treatment, docs, scientists, and advocates like Lance—has become just life to me. Standing with me watchin Lance speak were: my coach, Rick Babington (who works with Lance's coach Chris Carmichael), Piero and Michael, who I ridden with earlier in the day, our Friday morning compatriot Diarmuid Quinn, and Adam Harrison from Dangerbird who introduced me to the Nike people and got the whole Livestrong ball rolling in the first place. Another major detail about Adam: many years ago when he was my assistant, he would not stop goading me until I asked Jo Ann on a date. Standing behind the mixing and lighting desks, I experienced a warmth, and basked in a real moment.

All of these dudes have walked the path with me. Helped me to stay alive and sane. Helped me to be a better person. As we stood there listening to our idol speak about changing the world through cycling + art + music + action, it was clear that I was witnessing one of the gifts of being a cancer parent.

Jeff, your journey is inspirational, not just the paths you've taken on your bike. I'm so proud of you!
Love- Art-Music- Action!!!

Your entire family is so inspirational. You've been handed such difficult cards and you all make the very best of it. I live in Austin but travel to L.A. 2-3 times a week for work. It would be an honor to meet you all and Pablo someday!