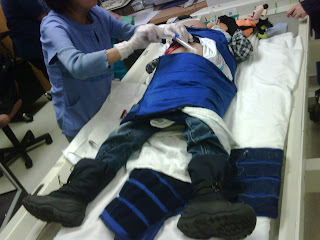 What better way to honor the coming of the ancient tradition of daylight savings time than to get up early for a GFR test? For those of you who are just tuning in, the GFR is a nuclear medicine test that shows the function of Pablo's kidney. He has only 2/3 of one kidney left, so it's a pretty important test.

This process will take us til noon. We have to come back for more blood draws in an hour, then two hours later. Jo Ann and Pablo are gonna come to the office during the two hour gap to hang with me. Pablo's gonna watch a Scooby-Doo on iTunes cos he was heavily bummed when he had to walk out on his episode that was playin in the GFR lab.

We'll have news of the GFR test result later on. There aren't many stats we can chase with the type of treatment Pablo's doing so the kidney function number is exciting to us. Jo Ann and I are goal-oriented peeps and so is P.

At 2 p.m. Dr M is gonna do an exam of P's body. Over the weekend, he noted some pain in the center of his tummy and on his right side. He also had a burning sensation whilst deucing it up. Dr M is the man with the plan. We've learned not to freak until he takes a peek.

I'm heading back to the office. Van Halen cranked to 11 in the car. Haven't listened to music in two weeks. Must be a sign. This could be better than last if I let it.