Yesterday, Grady, Pablo and I went to a cool art market at Shepard and Amanda Fairey's new studio/gallery on Sunset Boulevard. You know Shepard as the "Obey guy." I have known him and Amanda for about eight years, and I am blown away by how they have grown their design company. They have expanded Shepard's artistic reach to more areas than I'd ever imagined, an they've done it with elegance and solid, smart moves. Their design business is called Studio Number One, and their art gallery is called Subliminal Projects. Anybody can go into the art gallery–they show all kinds of great artists there. What they have done and how they have done it is inspiring to me as Peter and I grow our little corner music bakery called Dangerbird.

BTW, it's a little known fact that after Peter designed the Dangerbird bird, Shepard designed the type that communicates our name. He also designed an album package for Scapegoat Wax, a band I used to manage, who were on the Beastie Boys' label Grand Royal. I met Jo Ann when one of her directors, Evan Bernard, directed the video for the band's hit song "Aisle 10." Ahhhhhh, such sweet memories....

Wow, that was a heck of a tangent.

Back to the art show. The official name of the event was Simple Pleasures 01. I had no idea what to expect, but Amanda emailed me the info about it, and said it would be fun for kids. And that the Green Lunch Truck would be there serving lunch. It was fun, and although we didn't eat le Green Lunch Truck, it looked yummy. Next time we + our appetites + that truck are in the same place, we will do some damage.

The show was indeed perfect for kids. It was like a farmer's market, except with hand-made art stuff instead of watermelons and casaba beans. About 20 different artists had their stuff for sale. I bought a drawing of a cyclist flying over his handlebars from this guy Emilio, who is friends with Peter's friend Ashkan. These guys did the art for a CD comp we did with the Celtics earlier this year. It was good to meet Emilio, and felt good to support his craft.

BTW, I am totally jealous of art people. They get to do things during the day, and early evening hours. Rock music, being more aligned with the tradition of theater, happens only at night. Which was cool before the introduction of kiddies in my life....

After we browsed the bazaar, Amanda took us on a tour of their offices. They run a tight ship over there–security and everything. All the employees were wearing laminates around their necks, like we do on tour. In order to get us into the back door of the office, she had to tell the guard we were with her. Which was cool, cos I'd hate to look like some weird guy attempting a heist with a little bald shorty and an angsted-out teen on a hot Saturday afternoon ....

Their offices are gorgeous and simple. And almost identical to the style we are building in our new offices, which are being built in our new building on Sunset Boulevard, about 1.5 miles to the north. The place was empty, quiet and cool. The only creature stirring inside was Shepard. When we went into his office, he was hard at work at his computer, finishing a new portrait. His office is filled with things to look at–a mini gallery in itself. He and Amanda grabbed a stack of Obey tee-shirts and hoodies for Grady, who was–and I am not exaggerating–losing his mind. He has met Shepard before, but not since he and his friends became conscious of who Shep is. Seriously, I think Grady is probably coming to right about now.

It was a fun hour of life in our neighborhood. We are so lucky to live where we do, and to have such interesting, inviting friends. I never forget how lucky I am, and how lucky my family is. I get to make a living being creative, and, more to the point, furthering the vision of intensely creative people. And in the process of doing that, I have gotten to know even more creative people.

OK, here are some pics from Shepard and Amanda's offices: 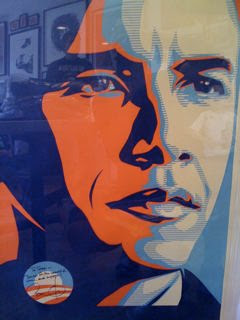 The future president, in the square office of the man who created the image most people under 50 will think of when they vote for him. 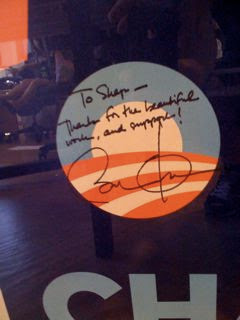 Thought you'd like to see the detail: Future President Obama's inscription to Shepard. That's beyond cool. 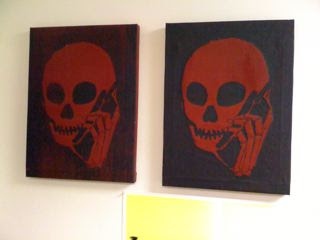 I always forget what this character is called. But every kid and person loves it. We all talk on cell phones, so it's hard to take it personally. Kids love him cos he looks cool. Adults love him cos we get to assume the artist is commenting how bad mobile phones can be for us. I saw it hanging in the offices, and had to shoot it. Space Invader! A minute after we saw this piece in one of the hallways of the office, Amanda took us through a door, and we entered teh art gallery, which was filled with people. One of them was Mr Space Invader himself. She introduced us, but I forgot his name. Even if I remembered it, I probably couldn't post it on the blog, because his identity is secret.
This is another artist whose work kids and adults alike love. Grady and I have tripped out for years at the massive size and dangerous location of many Invaders in our hood. When we met him, we talked about an Invader that he put up in LAX. I'd like to see that....