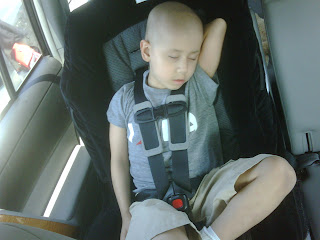 I talk a lot about Pablo's penchant for fun. It's fun to do so. And it's how he spends every waking hour. Of course, all that fun requires refueling and resting sessions, like the one you see in this pic.

We've been on the go all day. P woke up this morning just after Mommy and Grady. He literally lifted his head, looked at me, and said, 'Papa, where's Mommy? I'm gonna go upstairs and play.' That's exactly the way life oughtta be for a kid his age.

After G went off to school, P and I played cops n robbers. Yesterday he got three sticks of fake dynamite from a killer toy store in our hood called Ozzie Dots. So in addition to shooting and beating up the robbers a/k/a his stuffed animals and elf baby, we also blew them up with TNT. Gotta say, I felt much more satisfied blowing those guys to bits. It adds a sense of completion to the beating process!

After our morning appointments in Santa Monica, we stopped by our friend Jim Haygood's editing bay. He is editing the new 'Tron' 3D movie and invited us over to see a teaser clip. It was stunning. He had the best, highest quality 3D glasses I've ever seen, and a proper 3D monitor (didn't even know they existed). P and I tossed the specs over our eyes and dove into Tronland. So cool. It was a wonderful counter-balance to P's medical morning.

We are now heading to Liz's Antique Hardware. Pablo saw a skeleton key at one of the offices we were in; he was immediately fascinated and HAD to have one. Liz's is the ultimate LA spot for knobs + hinges + old skool keys. We called to verify they have some loose keys for sale (disappointments are not in our repertoire today) - turns out they have a full supply of keys, starting at five bucks. Not a bad price for organic, handmade, old time happiness.

Tonight, Polly is taking Pablo to a screening of the new Pixar 3D film 'Up.' It opens this weekend. Justin 'Bumper' Reeve from Dangerbird arranged passes for us, so Pablo could see it in advance at Disney's showcase digital theater on Hollywood Boulevard, El Capitan. Another great experience for our little carrier of light and love. LA is filled with 'Up' billboards. It jacks up my heart to hear Pablo scream out in excitement when he sees one.

That sounds like an awesome day. I wish Pablo many, many more like that. I check in with you guys everyday and Pablo is always in my thoughts for good health and happiness as well as his entire family. I hope he enjoys the movie. He deserves all the happiness his heart can hold and then some.

Thinking of you and loving you here in Camarillo.