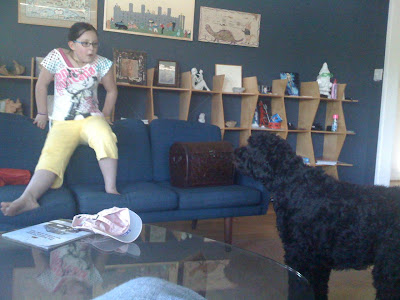 Isabella, getting to know Beans. 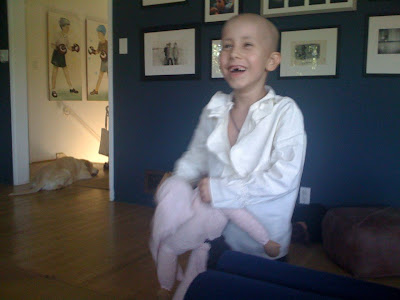 Pablo showing Isabella how to properly beat up his elf doll, Fluff Head. 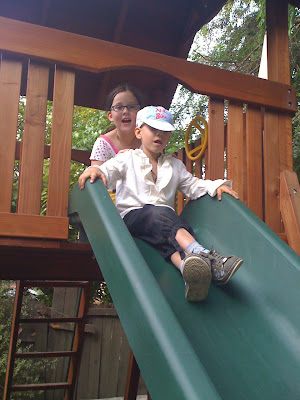 On the play structure in the back yard. Isabella saw it through the window and lit up. 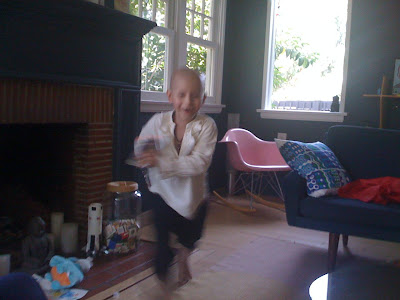 This is how we see Pablo a thousand times a day: running through the house. Polly shot this a rare photograph—he's usually too fast for the camera.
Our sister-in-law Susan and niece Isabella arrived yesterday morning from Chicago. P + Isabella got into play mode immediately. Because of the distance between, um, Chicago and LA, these two have only played together a handful of times. When you see them interact, you understand one thing: family is family. Plus, Isabella adores her little cousin. She always has. Her adoration is in full bloom with Pablo these days. She's like a big-sister—very nurturing, always thinking of new ways for her and P to play. Isabella is nine, so she's a good bridge between P and Grady.

I haven't asked Isabella, but I look at her, and I wonder if she sees the connection between her father's battle with cancer, and the fact that her little cousin is engaged in the same fight. She was three-and-a-half when Scott passed away, and 18 months younger when he was diagnosed. I may not know the answer to this question for many years. I'm certainly not gonna sit down with her during their four days with us here in LA and get into the heaviness. Only way into it is if it comes up naturally. And based on the playnoise coming from upstairs, I don't think Isabella wants to talk to me about nothin but funness.

On the fun front: at 10 a.m. we'll be crashing the gates at Universal Studios! This will be Isabella's first time at the park, and Pablo's second. They are off-the-charts excited. So are we. The cool thing is we're going in style, with VIP/ front of the line passes, courtesy of Justin 'Bumper' Reeve from Dangerbird. Once again, he tapped his friend Kelly Demko at Dreamworks Pictures—she has been a constant support to Pablo—to sort us out. It's nice to know we don't have to wait in super long lines. Pablo can't be around that kinda germ and funk factor. If we get our flow right, we'll be outta there by noon, and headed somewhere healthy and yummy for lunch.

Time to get motivated. The two youngest Castelaz humans both know how to tell time, so they'll be on my case soon!

Luke & Amelia have girl cousins from Chicago too!! They're the best!! Have tons of fun!!
XO,
Mary Kay