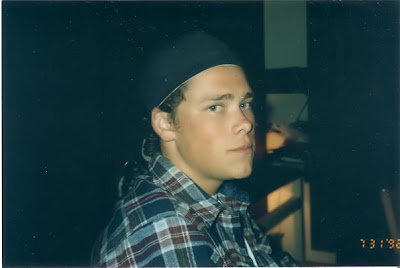 Doug 'Pikul' Kratz
Today is the eighth anniversary of the passing of our friend Doug 'Pikul' Kratz. Doug was a video executive at Virgin Records. He was covering an Aliyah video shoot in the Bahamas and died alongside her in a private plane crash on the way home. Doug was part of the path of Jo Ann and I meeting each other—he was the label commissioner on the video we met on. The band was Scapegoat Wax. I was their manager. The song was 'Aisle 10.' The director was Evan Bernard. Jo Ann was his executive producer.
Doug was a serenely gentle man who smiled like a prince and was loved wherever he went. We talk about Doug all the time. We Pablo about him many times, too. Over the past eight years, we have missed him dearly. Eight years we couldn't have known that a little boy would be born in 2003 and his name would be Pablo and that his grave six years later would be a five minute walk from Doug's. But today, all of this is true. And today, we drop a flower on Doug's headstone every time we bring flowers to Pablo.
Looking at photos of Doug today, I am taken aback by something—how young he looks, how far away his hair styles look, how much I enjoyed being in his presence. Whenever I think of Doug, I always go back to one particular meeting with him in his office at Virgin. We were supposed to be talking about the Scapegoat Wax video, but all we talked about was indie bands in Silverlake. It shouldn't surprise me that Doug hasn't aged. Still, it really did stop me in my tracks. I ought to get used to this. Even as we all age and lose our hair and get grey, Pablo's shining face, like Doug's, won't change at all.
Before I go, I have to tell you another thing about Doug—another powerful link between him and us. He was very close friends with Silversun Pickups, long before there was a Dangerbird Records, and at a time when I only casually knew Nikki, the band's bassist, and Joe, the keyboardist. A couple years after Doug's passing, when SSPU had signed with Dangerbird and were coming up with a title for their debut EP, they decided to name it after Doug's nickname, Pikul (pronounced pie-KULL). Like the many Pablo dedications that have sprung up in our community, the 'Pikul' EP carries Doug's spirit...forever.
We miss you, Doug.
at 6:11:00 PM

Wow, Doug does look so young. Every few days, when I'm having a Pablo moment, I think of people who are with him and showing him the ropes... sometimes the link from here to there seems paper thin.

I was with Doug when he took the Pikul nickname... taken from a film, actually, directed by... Cronenberg, I think. We saw it in his home-area of the Burbankish vicinity. He had big time crushes on Jude Law and Giovanni Ribisi. Like the SSPU, this was before either was famous... though he had to reconcile Ribisi's Scientology. In any case, yeah, your site and dedication to him was real niceto read. I, too, miss him many years later and always wonder if others do as well.. so I googled him and found you. It's neat... we are all so far from each other bt we still honour him. It's good... we are united in that sense, though strangers... um... yeah In any case, thank you very much for placing flowers on his grave. That's nice of you. I went to the funeral with people who were silly and they didn't want to go to the gravesite after the service, and I was in their car, so I never got a chance to see it. That's a big regret. In any case, next time you are releasing the garmonbozia and inhaling beautiful past spirits, if you could, tell him Cuppy said hi.