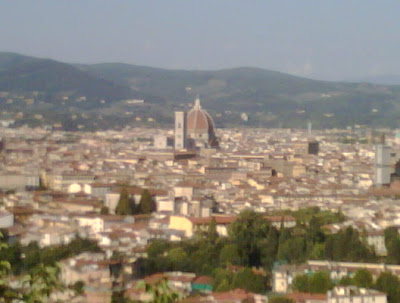 This morning we left our villa on the hill and checked into another albergo housed in an ancient building. We exchanged our baron's view of the entire city (above) to be in the thick of things in the citta centrale. After two days looking down on this wonderful city, we are now set up in a penthouse with this out one window: 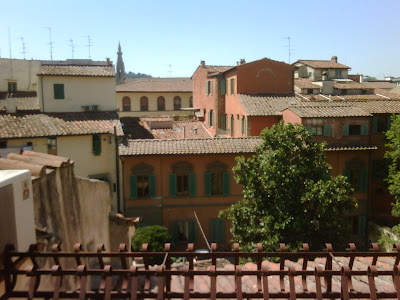 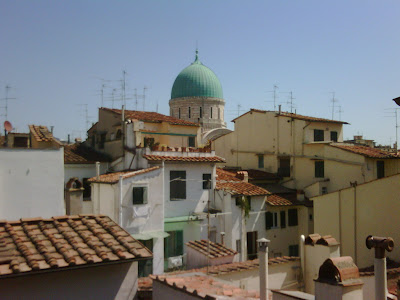 We checked in early, dropped our bags and went to rent bikes at Florence By Bike. Very nice people, and a great selection of bikes from single-speed city bikes (our choice) to mountain bikes and Bianchi road bikes. I may go back tomorrow to grab a road bike and head up into the mountains. I could head out of the city center in any direction and be gaining elevation in 10 or 20 minutes. If I get up early enough, I'll do this. Otherwise, it'll be too hot. It's extremely hot and humid here. Like LA but with pulverizing sticky humidity.
Riding through Firenze is much faster than walking. Another way of putting this is that we got less fried by the sun while biking. Plus the breeze on the bike provides a pleasant cooling in itself. On the way back from the central market, we ambled toward our hotel. I half looked at the map, but told Jo Ann and Grady I knew where we were headed. I did. Kind of. The main goal was to get us lost, so we could explore the city more. On two wheels, this was fun. On foot, it can be miserable—the footpath burning up through our shoes, bumping into other tourists, vendors with their leering eyes and Philip Morris cigarettes leeching toxic funk into the hot Tuscan air.
Cruising down the cobbles on our bikes took us away from all that. 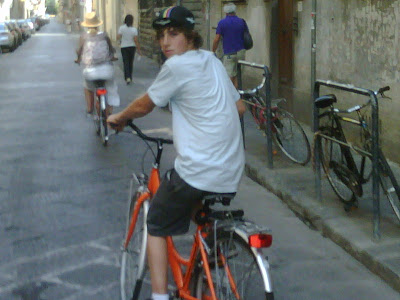 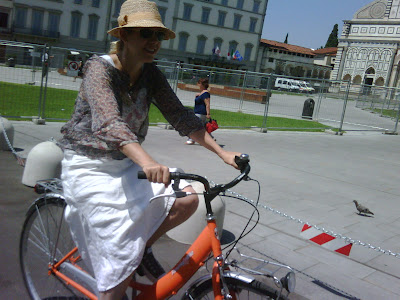 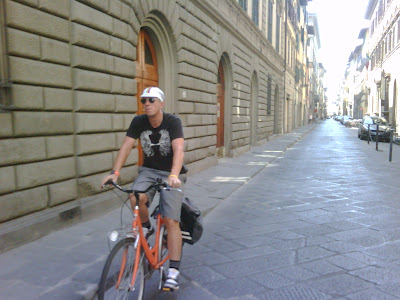 Bikes, as they always do, gave us freedom. We happily got lost in the neighborhoods adjacent to our hotel. Each street revealed a new piece of this city. There are religious artifacts and paintings built into the corners of many—most—buildings in the city center. There are tiny strade barely wide enough for our handlebars to pass through—a reminder why Fiat and Citroen make such teensy cars for the European market. Speaking of Italian cars, the cab that carried us to the new hotel was a Fiat fueled by natural gas. Behind the fuel door at the back of the car is a nozzle like the one on your grill. Except it's a car. Weird how countries whose cities date back to, like, Jesus and Ceasar and guys who looked a lot like Russell Crowe, and smell alternately like rotten eggs and piss and food of the Gods have figured out what our so-called leader of the free world guv hasn't.
OK, stepping off of pulpit now. It's just that, well, I'd like to have a car with a couple Blue Rhino tanks in the back. I'm jealous. And when I get jealous, I get mad.
Dinner last night at La Giostra we had some of the best food ever. Their slogan is 'In Food We Trust,' and they don't back off it that. Their sub-slogan refers to their practice of slow cooking. They are also true to that credo. Dinner was a 2.5 hour experience, and worth every minute. The place was founded by Dimitri Kunz d'Asburgo Lorena, a Hapsburg prince. Even if he had not born of noble blood, the dude's recipes would blow the minds of everyone who steps foot in the place. He passed away, but the energy in La Giostra is still vivid. The biggest surprise about dinner last night? It was one of the least expensive nights we've had since leaving LA nine days ago.
Intertwined in all that we do are remembrances of Pablo. Some bring laughter. Some bring gut-wrenching tears. Going to sleep at night always brings about weeping. Halfway around the world on our mission to find—well, um, I don't know what—it still doesn't make sense to us that Pablo is gone. Or why he had to go. Or that he won't be coming back. There are signs of Pablo everywhere we go and everywhere we look. Too many to tell you about.
This one hit me quite hard at the bike shop this morning: 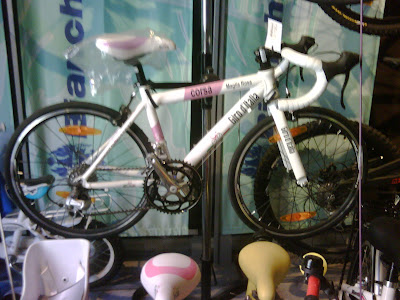 Pablo and I had always talked about getting him a mini road bike when he was ready. This one is a special model commemorating the Centennial Giro D'Italia. To my American eye, the striscia rosa on the top tube would make this look like a girl's bike. But pink—rosa—is the color of the Giro leader's jersey, just as yellow is the color of the Tour de France. The Giro happened in May. Pablo and I watched many of the stage finishes together on the Universal Sports network. Now, our dream of riding road bikes together in beautiful and impossible locations is just that—a dream. Suspended, forever.
at 8:49:00 AM

Some of those sightings of Pablo are meant to be kept private,within your grieving hearts,others you will shout from the rooftops when it is the right time and right place.I do not think it will ever make sense.Ever.I certainly haven't been able to grasp it all as we travel the world of pediatric cancer.We just pray for your strength as you navigate these days filled with it's moments of uncertainty.Love to all.

I wish I had the right words to say to your family. My Grandma passed away about 13 years ago from ALS. I just got out of a shower where I cried my eyes out. I currently don't live in the same city as my parents and all I could think about today was 'I want to talk with my Mom'. And then it hit me that while I could call my parents up, my Mom could never call her own Mother up and talk. I then proceeded to cried my eyes out because there are times I take for granted talking with those I love, I realized for everytime I wanted to talk with my Mom, she's not able to call her own Mother up and talk.

I'm not really sure what I wanted to tell you with this post, but I think the message is reguardless of when and where we talk with those we love and those who have left us, their message and personalities are always with us.

Your pain must be so intense! You and your family have much courage to go on living and dealing with your loss. But dreams do not have to remain unfulfilled, sometimes they do need to be adjusted. Although Pablo will not be able to physically ride his road bike with you, perhaps, you will decide in time to ride your road bike in those places of beauty and adventure you had planned in honor of Pablo and his love of life! Someone will want to ride there with you, whether it is Joanne and Grady or a friend, your dream can still be shared. And of course Pablo will be riding with you too in his own special way! I keep you and your family in my prayers every day. Elizabeth

Reading all of your posts. Sending you love - Jen Rhodes