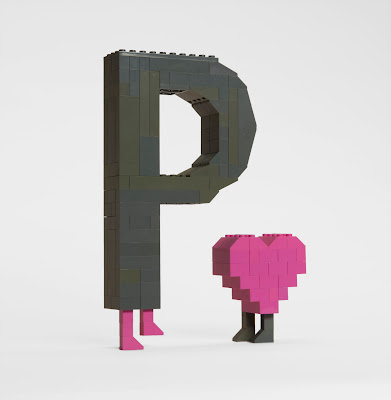 Remember the week long Lego camp Pablo attended at Eli's house? He had great fun that week. Hours and hours of building Lego stuff with gears and pulleys and motors. Stuff like this: 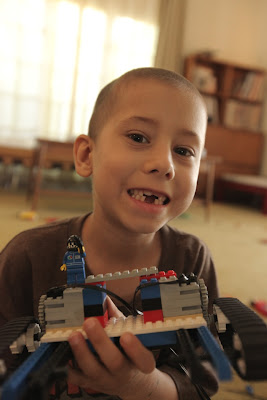 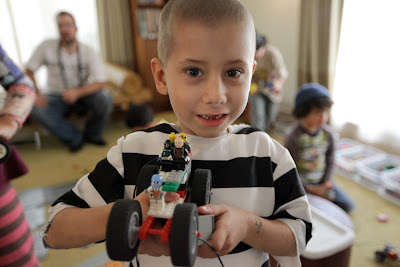 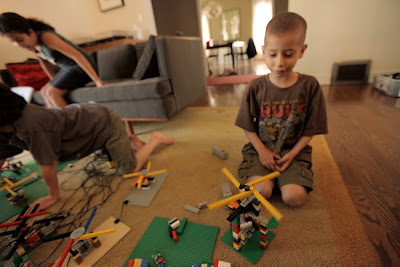 Look at how HAPPY Pablo is in these pictures! Those Lego objects are wired for action. See the black leads streaming out the back of tank in the top picture? I remember going to pick up Pablo and him making that thing crawl all over the floors, commanding it with a remote control. For a boy who would turn six years old in a few days, nothing could be cooler than a damn Lego vehicle that moved and made moving, geartastic noise without the aid of a boy's fingers and a boy's imaginative vocalizations.
That week, the Legos weren't the only things that made Pablo happy. For the first time in a year he got to play—every day—with friends. That week, he got to play with his oldest homies Eli and Isaac. Their mommies Helen and Dorrie are among Jo Ann's best friends, so these guys have been in Pablo's life from the day he was born. Watching these dudes—and Isaac's little sis Nadya—grow up was something that made me feel a deep satisfaction in the human experience. The deepest I'd ever known. Look at these dudes. Amazing characters, each of them. 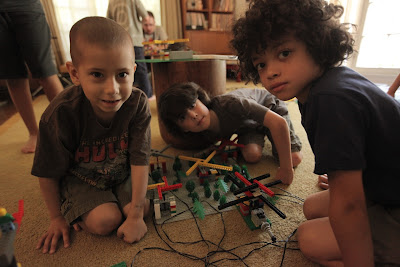 In the times I've seen Eli, Isaac and Nadya since Pablo's death, I see a piece of Pablo in them. I also wonder how it feels for them to see us. Nadya is probably too young to fully understand. But Eli's 9 and Isaac's 8. They get it that their little friend Pablo had cancer and fought it hard and had a bunch of needles stuck in his body and his hair fell out and then he died. I wonder how it is for them. I wonder about their concept that although Pablo's body is no longer here, his spirit and energy are still with us. It would be easy enough for me to ask either of them, but I always feel it's not my place to ask my friends' child these things. Like maybe it'd be too intense for them. More than that, I'm scared to talk to them about it right now. Someday. Sometime. Those conversations will happen, and they'll happen at the right time.
It feels good to write today. I've worked through the tears that washed over my eyes earlier in this writing. Now I'm smiling as I remember Pablo's Lego camp week. Jo Ann and I had a great time driving Pablo to Eli's house every day that week. It felt like the old days, before the cancer diagnosis, when Pablo was in preschool at Walther. That week was special. We felt that we had kicked the cancer's ass. Imagine the simple pleasure, the unconstricted breathing, the easy plans, the loosening of facial and respiratory muscles that'd been clinched for months on end. Imagine how happy our cells were that week.
When I sat down to write today, what I wanted to tell you about is the Lego blog Eli and his dad Scott started. The Lego-fied Pablove Foundation logo at the top of this post is the first creation they posted on the blog. We got this right before we left for Europe. We laughed joyfully when it came into our IN boxes.
You can keep a tab on Eli and Scott's growing gallery of Lego creations on ELISLEGO blog.
at 7:50:00 AM

Tears flowing again! Incredibly, he looks healthy in those pics, doesn't he? I'm so happy, happy he and you all had that amazing week of happiness! It is/was a blessing, I'm convinced of that! It brings you tears, but also smiles to know Pablo had that time with his wonderful friends. He will always be in my heart! Sweet Boy! Thank you for sharing him! Love, Lisa Hickey

How well I remember Lego Camp week. One of my favorite pics of Pablo was on your trip to the ATM to get Lego money. Sending good thoughts your way.

what a beautiful boy! thank you for sharing those amazing pictures and your thoughts. I think of you all often and hope that your days are filled with some smiles when you think of Pablo. He obviously had a fantastic time at lego camp and how wonderful it was for him to be able to creat those memories. I count my blessings each and every day and often wonder how you and JoAnne put one foot in front of the other; but it is obvious to me that you have a strong inner strength that is carrying you through. Keep that going, you are inspirational and through your blog are helping so many more families beyond what you expect!
Be well,
Lisa :)

Have you secured Lego as a Pablove sponsor....