Happiness Is A $2 Bill 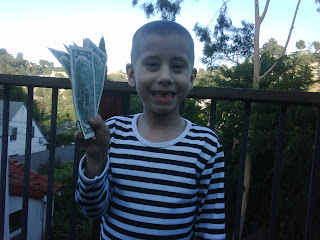 All of Pablo's birthday gifts made him happy. Saying 'I'm six!' makes him even happier. But a fistfulla $2 bills shot him from Silverlake to outer space. We're pretty sure the only $2 P had ever seen was the one Polly gave him that is (we think) in his piggy bank. There's something about seeing a stack of these rare specimens that's appealing to a kid. When he opened the card from Grandpa and Katie his eyes lit up, his smile lit up, and his hands couldn't get enough of those things. We're positive he's gonna be showing off those 10 pieces of crisp currency all week.

More pics later...including the four-foot pinata in the shape of Batman/Christian Bale from Billy and Shirley, and the hay bale shooting target and corresponding BB gun in the back yard - from Jo Ann's dad Harry, who has a hunting gun collection to rival the Texas National Guard.

Happy Birthday little guy.Sent mom a text telling her to give you a kiss from Zoey.If she didn't,make sure Papa does.As for you Jeff,I think you are an incredible Papa and I love popping in here daily hearing all about you love and life, being a dad to these great boys.Hope your day was filled with laughter and loving.precious moments.