P Made The Grade 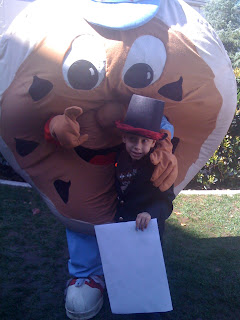 Well, Pablo made counts, but he's playing tricks on all of us. His platelets went up to 82,000 but his ANC dropped! It's really not a huge deal, they dropped just below the 750 mark and the docs are fine to start chemo tonight. Getting a bed on the constantly swamped 4W is another story. We have to go in at 6pm this evening so Pablo can be checked out by the attending, Dr. May, but P's bed won't be ready before 7pm. So, we will be waiting... which is fine. Here's the rub: we are getting bed 430B - now, most of y'all have no idea what that means, but let me tell you... it's the LEAST desirable bed on the floor! It's in a triple room and it's right in the middle. We have been at this almost a year now and this is our first time in 430B. The charge nurse called me just a minute ago to apologize and promises to try everything to get us out of there tomorrow, but, honestly, I'm OK with it. I sort of feel like we need to be there at least once to have had the complete 4W experience.

We had another fine day at clinic getting Pablo's labs drawn. There was an IHOP event in the garden and when we were leaving they told Pablo to go get some pancakes. As we were on our way, Raul, our friend from the blood bank called Pablo over to meet a celebrity. Brittany something or other from The Suite Life and other Disney shows was signing pictures. She saw Pablo in today's get up (white tank top, suit jacket, pirate pants, top hat with pirate belt tied around it and snow boots) and decided that it was LOVE. She hugged on him and kept asking him about his outfit. He was smitten, too, and loves his autographed head shot.

We went outside to check out the pancake activity and there were all kinds of characters out there... Batman and Robin and a cast of pirates. There was a chocolate chip pancake named Charlie and Pablo asked if he could take his picture with him. Cute.

We headed over the Fred 62 for lunch. We love that place. Pablo always get to go in to Jimmy's office after we eat and pick a candy out of his candy dish, so he was especially excited about our lunch date. Zeus, one of the office managers, always has a toy or some stickers for P. Today Pablo got two packs of Smarties and three packages of stickers - a bountiful reward for eating a good meal.

So, as we head into this final round of Doxorubicin, I humbly ask for all of you to hold Pablo in your own special spiritual place and ask for this powerful stuff to do the trick - rid his little body of all cancer cells without damage, and prevent them from ever returning!

Powerful prayers coming your way for sweet Pablo.May the nasty stuff do no harm except where it needs to and may you find your way out of there before long.Cannot believe you have missed the triple suite up until now ... lucky you, from what I hear.Hope they can move you quickly.East doesn't have one of those but it does have 2 massive corner rooms,2 to a room but tons of elbow room... we have yet to get lucky on that one ... maybe next round.Love to you all.Hugs to Pablo.

Most definitely sending Pablo all of our families best vibes his way.

Love and prayers for Pablo. Complete good health and freedom from all cancer cells.

Go Pablo!!! Thinking of you and sending you much love and support. As always a great picture!!! We are so familiar with 430B!!!! I think my favorite spot is next to you- the spot that's to your left if you're coming in the door. Hope you get moved soon! Take care of your Mom!!! :)

sending all the love in the world your way P!!!

Sending every ounce of Rush love your way!!!