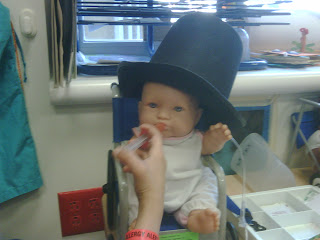 Pablo giving his patient an oral injection of medicine.
After breakfasting in the scenic CHLA basement cafeteria, we're in the 4 West play room. Pablo made a paper dragon, and then turned his attention to the baby 'patient' doll. He just informed me that I'm the baby's papa, and he is the doc. Clipboard in hand, he is asking me all the right questions: when's the last time the baby went potty?; has she been drinking and eating?; how is her energy? He then moved on to his blood analysis: the baby's ANC is 5 ('too low'); white blood is .001 ('that's way low'); red blood needs a transfusion. While he was ordering the blood, he examined the patient's eyes: 'there's bleeding - we're going to need platelets too.'

The kid knows his stuff! I tried to hold back my joyful laughter - it was fascinating to hear Pablo - er, Dr Castelaz - recite all this medistuff. On a deeper level, it's probably very healthy and helpful for Dr C to push that knowledge and energy around. Relieves it of all the seriousness that normally surrounds blood counts, transfusion orders and the myriad medical interview questions he and we get every day.

After watching 'Rocky II' and 'Rocky III' last night on AMC, P is officially a boxing fan. With his size M green medical gloves mimicking Rock's puffy red gloves, Pablo and his sock monkey doll went 12 rounds in his bed/ring. Not sure who won. But Pablo seemed to dominate the fight, doubling as the ringside blow-by-blow announcer.

Mommy and Grady could have slept til noon. They deserved to! But I woke them at 9 a.m. (thought they'd be awake, honest!) to ask for coffee. It was great to see them this morning. Sometimes, the overnight shift feels like an eternity. Especially when our roommate keeps the TV on and the volume cranked all night, which was the case last night.

Jeff Beck is our nurse today. He is one of our main crew of 4 West peeps, on loan today to 4 East. Jo Ann is workin hard as we speak to transfer Pablo to 4 West today. Looks like it will work out. Even though the two wings are adjacent, we feel more at home with the soft tumor crew and patients in 4W. They are family.

Pablo is doing fine. As usual, he is a mini-ringmaster in his giant comfy hospital bed. He's keeping us all going with ideas for board games, counting and telling stories. Dr M told me last night that we should plan on staying at CHLA a week. He isn't going to discharge P until his blood numbers rise. Not a surprise—same deal as usual. As strange as it is to shift our physical base to CHLA, we're used to it. And it's the best place for Pablo when he is neutropenic (zero white blood count), despite the fact that we live four minutes away.

We wish you and yours a happy Sunday. Will check in tomorrow.