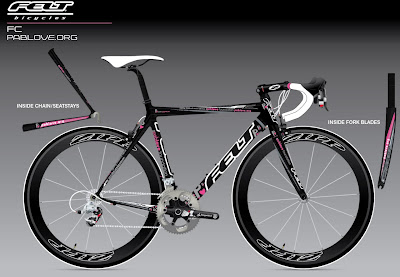 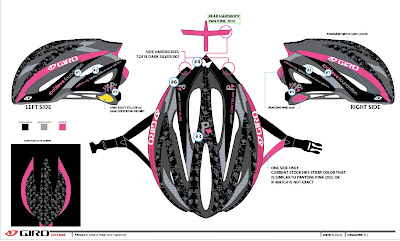 The Pablove helmet.
I forgot to include a couple important things in past week's Pablove Across America gear post—namely the Pablove bike from Felt Bicycles, and the Pablove helmet from Giro. For the bike geeks out there, the bike is a a Felt FC with SRAM Red gruppo, Zipp 404 wheels, Powertap SL+ rear hub, Zipp stem and bars. The helmet is a Giro Ionos with a custom Pablove heart-pink strap on one side, and a touch of Livestrong yellow on the other side. Elated and proud to say all these companies are our sponsors—along with Velo Pasadena, who are building our four bikes—fully backing us on the inaugural PAA ride.
We'll be stoked to ride this bike with this helmet strapped on our heads. By the way, was I clear in last week's post that I'll be doing this cross-country excursion with my dear friend and coach, Rick Babington? When I say 'we,' it is he who makes up the other half of my team. Throughout Pablo's treatment, Rick would come over to the house to ride with me, hanging out with Pablo afterward. He brought Pablo a book about a dude who rode across America with his Chihuahua in his backpack. Pablo loved the book, and asked about it often. Other people will join us along the way—but, sadly, no dogs will make the trip.
Back to the gear.... The bike was designed by Bob Thomson at Felt. His other job is playing bass in Big Drill Car. I met him through another rock and roll cyclist, guitarist Michael Ward. Another example of our community lending a hand to help us along the way. Bob originally heard about Pablo through one of Lance Armstrong's blog posts or Tweets. Only after read a ton of the Pablog did he realize that we had a mutual friend in Mr Ward.
Felt is based in Irvine, CA and are one of the coolest road bike makers around. I've ridding a Felt DA time trial bike for the past 18 months, and love it. Rode it in last year's Malibu Triathlon, and will ride it in this year's event as well. Felt sponsors one of the best pro cycling teams, Boulder-based Garmin-Slipstream. Interesting fact about Team Garmin: one of their top riders is Christian Vande Velde—a killer all-rounder, and the son of former pro John Vande Velde. John played an Italian in the most famous American cycling movie ever, 'Breaking Away.' Remember the scene where the Indiana townie kid goes out riding and meets up on the road with the Team Cinzano riders, and one of them sticks something in the kid's front wheel? One of those dudes was Christian's dad. Pretty badass.
The Pablove helmet—a Giro Ionos—was designed by Eli Atkins, the man who handles Lance Armstrong's constant stream of custom-designed headwear. I met Eli though Bob at Felt. Eli slapped Rory's Pablove logo and typeface all over this thing. He nailed it on the first draft. Note that the fine grey design covering the entire helmet is Pablo's smiley-face drawings. Cannot w a i t to hold this thing in my hands! The design was sent to Giro's factory in China where it will be printed and molded to the helmet. I can say without a doubt that Pablo would love this helmet. I'm smiling just thinking about it.
Dean reminded me that Pablo called these face drawings 'punch guys.' I'm gonna re-post the drawing here to explain why he called them by this strange name. 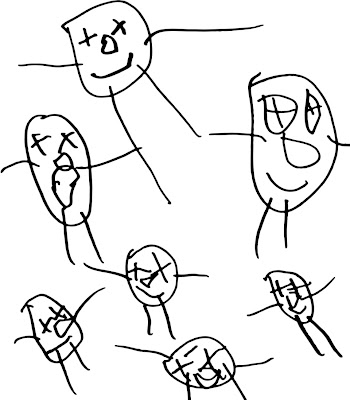 One day, Pablo said to me, 'Papa, you know how on cartoons, when people get punched in the face, their eyes turn into Xs?' He really wanted to know why their eyes were Xs. If you look at the eyes in this drawing, they're all Xs. All these dudes have been punched. Pablo mentioned this all the time. I can recall him talking about it from his car seat while we were driving to Larchmont Boulevard one day. Punch guys—drawn by him or some Bugs Bunny dudes back in the '40s—were infinitely fascinating to Pablo.
I'm infinitely fascinated by the love and dedication that's going into the planning of the PAA ride. The marketing, the fundraising, the sponsorships, the route and logistics. It's been a ton of work for a small army of people. And today, after six solid weeks of plotting and scheming, things are looking great. Seriously can't wait to announce it all late next week. Once we do that, I'll put up a post illustrating the above stuff and who's been behind it.
at 5:21:00 AM

If you guys end up selling any jerseys, helmets or gloves, we're ready to put our order in! :-) Can't wait to hear all the ride details.