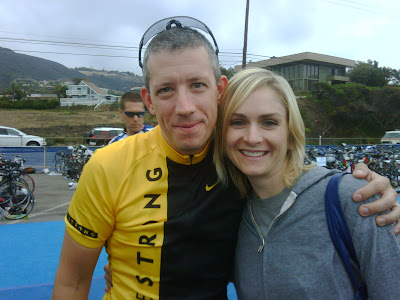 Me + Brie at Zuma Beach
Early Sunday morning, Brie and I woke up before the sun and cruised down PCH to Zuma Beach. Although there were plenty of people on the road with surf boards strapped to their cars, we weren't up + at em that early to get a good spot in the surf. In our car, there was a marathon runner in the passenger seat and in the driver's seat a Lycra-covered guy. We were headed to the Nautica Malibu Triathlon.
When we got to there, it was mayhem under a gorgeous low cloud cover. People everywhere, most of them in skin-tight competition clothing, bold numbers written on arms and backs of legs and the frantic pre-race energy sparking off in all directions. 3,000 athletes, plus families and friends and—this is LA—paparazzi to film and photograph the celeb participants. We met our swimmer buddy Ivan in the transition area. Less than a minute later, we were cruising to the mandatory chalk talk with race organizer Michael Epstein. He ran through the safety guidelines and the rules—standard stuff. Then he paused to note that two athletes in this year's race lost children to cancer in the past year. As Michael was speaking, it occurred to me that I was one of the people he was talking about.
'This year's race is dedicated to Malena Shladovsky and Pablo Castelaz,' continued Michael. A wild roar of clapping and howling erupted from the sea of tri-tweaked athletes standing in the sand. I felt the tears coming up through my cheeks. Everything slowed. I wanted to scream. What actually happened was a muted cry. Not sure why, but I held back. Didn't want to open up. Brie put her hand on my back. We turned toward one another and embraced. I let it out a lot more in the shelter of her shoulder. Eleven weeks and one day ago, Brie sat at the side of our bed and compassionately guided Jo Ann and I as we guided our little boy Pablo to his final breath. As I held Brie and she held me, I released gratitude from my solar plexus. Not able to say it—again—I let the energy do the communicating. It felt safe to be there with Brie, of all people. It felt great to clear out my mind and heart with tears. Nothing is better than a good cry. I ought to know. It's on the menu every day.
From that point on, the morning flew by. Ivan is one hell of a swimmer. He zipped through the half mile ocean swim. I pounded through the 18 mile cycling course. Brie sailed through the four mile run course. We had fun. Peter, Brie and Jo Ann urged me to have fun. I tried. Mostly, I just wanted to slaughter my pedals. I did the best I could. This evening, I checked the results online. I called Brie. She'd already seen them. We spent a few minutes on the phone, proudly dissecting the data on our race. For athletigeeks like us, this is fun. We came in 8th place overall among relay teams. I came in 10th place among the cyclists on relay teams. More than anything, we had fun. And we did in honor of Pablo. My favorite way to have fun.
at 7:41:00 PM

It was so great to meet you on Saturday at the office with Josh. You are definitely an inspiration and I will make sure to spread Pablove all around. Good Luck on your journey!

Loving you from New York City - in your heart - Jen