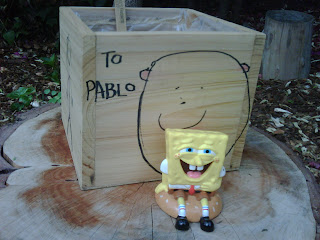 I had a couple meetings yesterday at Warner Bros Records. Some Dangerbird business, some Pablove Foundation business. A nice mix. The Pablove meeting was with Holly Adams, Diarmuid Quinn and Piero Giramonti. Holly had to suffer through far too much cycling geek talk as we settled in to talk about the Pablove Across America stuff. This trio is part of our extended family at Warner - a big group of people comprised of longtime and some new friends who have banded together to help us market and raise corporate funds for Pablove Across America.

As I was walking out of that meeting, a friend of mine, Brant Weil, was standing outside Diarmuid's office. Not surprising to see him. He's a marketing exec at Warner. As I approached Brant, a smile appeared on his face - not always the case when a label guy sees a band manager. Since Brant and I don't have a project together at the moment, I knew that we were all good. 'I have a story to tell you,' he said as we stepped down the stairs into the lobby.

He began by saying something Jo Ann and I have heard countless times over the past 16 months. I'm paraphrasing here, but it went something like this: 'I've started to write this story to you a million times, but all I've got is this half-written email.' I laughed and said one of my favorite sayings of late. 'I get it dude.'

That's my fave turn lately cos it's true and cos it applies to so many things I hear from so many people. Somebody might start to tell me about their confusion and how much it hurts.

Somebody might write an email describing a wonderful shift in their day that was inspired by simply letting go of a useless hurt or resentment.

The thing about the half-written email - we all have them in our DRAFTS folder right now, right? - is this: it's a trick our intellect plays on our emotional selves. The thing between our ears hedges and holds back. The emotional fire dims. Gets bummed. Then the phone rings. Then the moment passes. Something like that... That's the way it always happens to me.

Brant's story was touching. It felt great to hear how Pablo's death has affected him. He was out of town when Pablo passed away. The blog post from that day hit Brant in a way that caused him to not second-guess. I'll leave it at that cos I didn't ask him for permission to tell his story. The main message is that I am grateful Brant told me his story. Whether it had come in the completed form of that half-written email or in person, as it did, his words inspired me. Made me feel clear and full of hope.

Running into Brant was unexpected. And yet it feels like our meeting was meant to happen. Like if it hadn't happened something wouldn't feel quite right about Friday September 11 2009.