Pablove In St Augustine+Switching Over To Video Blogs Starting Saturday 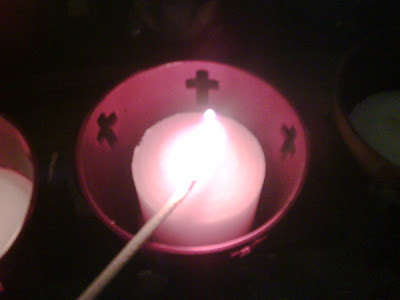 A candle for Pablo and Scott
At the end of my two hour ride here in St Augustine, Florida, I walked into the Cathedral of St Augustine dripping with sweat, salt burning my eyes. Leaning my bike against the back wall of the church, I walked slowly toward the altar. The cleats on my cycling shoes clacked on tile floor. The cathedral in an incredible specimen of Spanish architecture. It felt as though I were in Spain—in the mid-1500s. Everything about the place is sacred, including how well preserved it is. The Spanish style of Catholic architecture and interior embellishment is quite different from Italian. Lots of gold accents painted on deep brown raw wood. Black wrought iron crucifixes. I'm not a religious person—I believe in a combination of the in-the-clouds, white-bearded God, and a more oblique Universe-oriented God—but I grew up going to a Catholic school, so when I'm in the presence of things that are meant to convey reverence, I get reverent. It works on me. As it should. 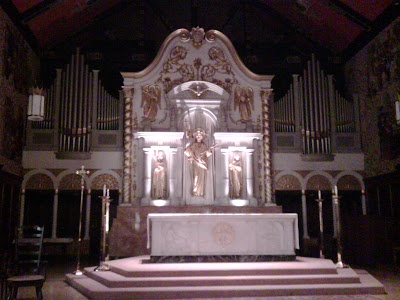 I was an altar boy, so when I'm in a Catholic church I always take a good look at the operations around the altar. Today, as I stood in front of the massive altar, I recalled one particular morning in seventh grade. I was the altar boy for school Mass at St Adalbert's. The entire school was there, plus the usual gang of old Polish women who attended every Mass. To them, our church was called Kościół Świętego Wojciecha. They spoke only in Polish. For instance, when the congregation was prompted to say, 'Praise be to You Lord Jesus Christ,' the elderly Polish women would say, 'Chwała Tobie Panie Jezu Chryste.' Me and my friends, we thought it was hilarious that long after our English business was finished, the old skoolers in the back pews were still chewing on syllables. It was torture being an altar boy at St Adalbert's. And not for the typical reasons they show in the movies. Thing is, when I would serve school mass, I'd hear the extra-long Polish response echoing from the back of our giant church. I'd hear my classmates quietly laughing. And I'd be biting my tongue, almost to the point of bleeding, as I held a giant gilded metal-covered Book of Psalms in front of Father John our priest. It was not cool to laugh in front of a priest, especially when holding the Bible. A great, and totally unexpected, memory.
As I clacked away, a sense of peace came over me. Something deep inside me fell into place. Or, looking at it from a different perspective—something unimportant fell away. Either way, I felt more at ease, more open. Simple and clear. I went to the bank of candles, dropped my two sweaty dollars in the slot and lit a candle. 'I love you Pablo,' I said aloud. 'I love you Scott.' It was powerful to say it out loud. I knelt and meditated. I opened my eyes and looked at the Virgin Mary. I stood up. Took a deep breath. And clacked to the back of the church.
As I stepped back out into the pulverizing humidity, I realized that one of my deep-seated fears—the one that tells me I won't be able to accomplish everything I've set out to do with Pablove Across America—had evaporated. This fear, like any good fear, had been poking me for some time. When that cloud of fear moved away, I felt alive and energized. Reconnecting with the memory of my time beside the altar at St Adalbert's reminded me how lucky I am. Back then, I couldn't have imagined I'd have a son as exuberant and happy as Pablo. And I couldn't have imagined I'd be doing something as serious as riding my bike across the United States in honor of him. Hell, I'd only ever been out of the state of Wisconsin twice in seventh grade. And I didn't know anyone from outside Milwaukee.
When I let go of the fear and let life happen, good things come onto my radar. Fear is reaaaaal good when a giant Ford-RIDA pickup truck is about to edge me off the highway. Fear is kind of, like, dumb, in most other instances. Especially when it hangs around too long in my head.
One last thing: Friday's Pablog post will be the final written entry for a while. We've decided to document Pablove Across America using video blogs—vlogs if you're nasssty—for the duration of PAA. Starting Saturday, I have to focus on the task at hand: riding 100 miles a day, eating and sleeping. And talking Pablove to people who visit us on the road at our ever-growing list of Pablove events at hospitals and in people's homes. The time and energy it takes to write will not be available while I'm carrying out the PAA mission. Good news is, the Pablove Across America vlogs will document all of this—plus two clips a day from the road—in a cool way. We want you to feel like you're out here with us.
Since PAA is a Pablove Foundation activity, vlogs will not be hosted here. You'll have to go to the Pablove Foundation site - pablove.org. If you haven't been there yet, check out the series of clips that are already posted. We've been loosely documenting the preparation for PAA over the past month.
at 8:09:00 PM

God speed on your journey of love. I look forward to being with you all every step of the way. It is going to be awesome!

What a moving post. I am so looking forward to following your incredible journey of hope and love across the US of A.

Have an amazing ride, Jeff. I know you will.

We're riding this journey with you, Jeff!!

God Bless you, JoAnn and Grady for sharing your Pablove with all of us!!

Love to you my amazing friend.Sending you with love and strength for the ride.Proud as hell of you.Really and truly.