Our Late Night With Dr. Drew 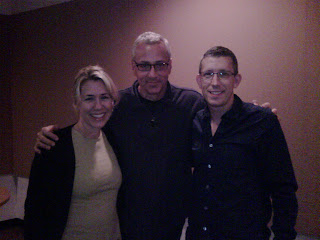 Jo Ann and I had the best time last night with Dr. Drew, the host of 'Loveline.' We've both admired him for years - to put it bluntly, Jo Ann has crushed on him gfor years - and meeting him only enhanced that. He spoke to us from several heart-centered places: the best talk show host around, as a father, as a talented therapist, and as a friend of a surprising number of our friends. He spoke to us - on and off the air - about the state of our relationship as we're grieving Pablo's death. He spoke very clearly to us, not pulling punches, as if we were on the couch in his office.

On a more superficial level, my favorite moment with Drew was when he told me off the air that he saw Van Halen play a dance in the early '70s at Grady's school, St Francis. Kills me. Why did I have to be born so late?

I was excited when Jo Ann said she'd come with me to the 'Loveline' studio. The show is on from 10 to midnight, which put it in the red zone for Jo Ann's schedule. We left the intimate Pablove Across America kick off party at Dangerbird HQ and headed to Culver City for dinner. At the studio, we chatted with Drew for half an hour before going on air. We told him how we'd met on a music video project for an artist that was on Grand Royal Records; their offices were directly across the street from Drew's studio. He got a kick out of the symmetry.

Brian Aubert from Silversun Pickups joined the show via phone from Hilton Head, SC. His ability to capture complex emotion in a single sentence blows me away. 'Loveline' has been on the air since 1983. Last night was the first time they'd dedicated a show to cancer. After the show, the producer, Ann, told us they weren't sure how their audience would receive the topic. Turns out the phones blew up the entire time the lines were open. The calls that got through proved that the cancer conversation is ready to happen - that people w a n t and. n e e d a place to open the dialogue. I was honored and proud to share this incredible experience of bringing with Brian.

I felt Jo Ann's love as she sat on the sofa behind me with headphones over her skull; every time I looked over at her for support and strength, her eyes shot both straight at me. Talking to young people about cancer was not easy. Listening to a mother - who was on break at her job - calling in to talk about losing her son to a brain tumor was not easy.

Being of service by giving feedback, that was easy. It's important to me to give away what I got. My experience is mine, sure. But it's useless if I keep it to myself.

Our friend Rob Goldklang, a radio promotion exec from Warner Bros Records, was also with us. He has dedicated himself to helping the Pablove Foundation in any way. He and Dangerbird GM Matt Solodky have been hammering the Pablove auction scene. Rob also set up the 'Loveline' appearance. His heart connection to Pablove was clear to Drew and Ann, and that got the job done.

It was a great night, and a unique experience to be behind the mic. It was also the single biggest media hit The Pablove Foundation has ever had. 'Loveline' is syndicated to 60 stations around North America, and has thousands of listeners online. In 60 minutes, the mission and message of the foundation hit hundreds of thousands of ears all across the U.S. And that was worth staying up late for.

Hi Jeff, I stayed up and listened. I loved it when Brian said that Nicki's bedtime is 9pm. That's my bedtime too, but I stayed up to listen. You did great! A natural. So glad that you and JoAnn enjoyed the experience. Growing up here in the San Gabriel Valley, I've heard my fair share of stories about Van Halen. Michael Anthony's sister used to live around the corner from me and I used to see him all the time driving by the house. In fact, one of my all time favorite things back in the day, were the backyard kegger parties we used to have with live bands. So fun! I loved them so much that I had one a few years back for my husband's 40th. We had a friends band play. It was so fun. Just like old times. I've been thinking about your "How You Can Help" video and seriously tossing around the idea of doing another backyard kegger party with a live band. Charging admission and donating all the proceeds to the Pablove Foundation. Still tossing the idea around and if it happens, it won't be until after the New Year, but if it does, all the proceeds are coming Pablove's way!

P.S. The San Gabriel Valley has raised it's share of successful musician's. I went to school with Mike Inez who is in Alice in Chains. They are on tour right now and I believe he was just on the cover of some music mag. He's a great guy and I have sent him the link to the Pablove Foundation via facebook.

Continuing our "loveline" here in Camarillo .... shooting straight to you all, as you wind down these days till the 10th.Love and light my friends.Always.

Pablove across the universe! I love the idea of your voice, your love for Pablo and your passion for the Pablove Foundation going over the airwaves all over the world - and beyond!!
Peace, love and light - I'll be thinking of you as you ride across America....

i don't want to one up the doc, but the doors played at Palos Verdes high in 1969, Also, accidentally coming upon bob forest (is he wearing a wig with a hat attached?) being a drug counselor on celebrity rehab remains the most surreal moment in my personal viewing history.jeesh. ride on dude! sharon

hi there, native of sf bay area,living in finland, and mom of a 20 month old boy. Listening had me in tears and i had to look at pablove. Thank you for touching me. Your son, pablo was a gorgeous precious boy!

I donated what i could, and wish your family all the best.

take care
regina
p.s. my last name is casteleijn and no one can pronounce that either :-)

OK, JoAnn & Jeff... You two are becoming the real celebs in Hollywood; I promise I loved you long before you became famous. :) We will forever be fans of what you are creating for our world.

We're looking forward to our next stop in St. Augustine, Florida and we are sharing the Pablove!!

P.S. Jeff, my husband most definitely has been a Van Halen fan for decades. But to soften your frustration, he started high school at St. Francis in 1975 and missed Van Halen by a MUCH shorter margin. Like you, he said he wished he had been born earlier... :)