Pablo and I arrived at the Radiation Oncology lab at 7:15 a.m. We read a few pages out of a book, and the nurses came out to get us. Since his port is already accessed, we had about five minutes of prep work to do (blood pressure, sticking sensors on his body) before rolling his gurney into the radiation room. The treatment took about 20 minutes. Pablo woke from the anesthesia without any puking or gnarly stuff. Thank God. That only makes it harder on him, and on us.

In that frantic moment, we had two options. One, go round the back of the car and pee on the wall—but, really, you have to be drunk to do something like that. Although being jacked on chemo and radiation is pretty intense, it doesn't quite qualify you for the public pee-pee Olympics.

The second option? Pee in Papa's brand new Velo Pasadena water bottle that's SO new it hasn't even made it onto his bike yet!

We went with option #2. I ripped the top off, flung the water out of the bottle, and let him rip. The great thing is that Pablo went from a pretty rough mood to, well, as they say, pissing himself laughing!

I'm glad I was able to be of service with the bottle and all.

Since coming home, P ate rice, strawberries and sushi. He let me eat his seaweed. (I devoured it. MMMMM....24 calories!) We snuggled in bed as he watched 'The Secret of Nimh' and I worked on my laptop. We had fun talking to Mommy, and saying goodbye to Nana (she is flying back to Houston as you read this), and saying hello to Polly, who is hanging with P now.

On a side note, I met a mother in the radiation waiting room this morning. Her little boy Darrell is 13, and is in, like, day five of a 14 day radiation course. I saw him yesterday, and again this morning. He has been at the chemo game for a month longer than P, and is a few days ahead of P in the zapping chamber. Darrell looks GREAT, and, other than the fact that he was standing in the waiting room of a radiation clinic at a hospital, you would have NEVER known he had cancer.

His mother and I talked about the joys and the challenges of having a son with cancer. Like us, Darrell's mother has found that her son's Hodgkin's Lymphoma has united her family, her neighborhood, and her faith in life. I didn't expect to meet any new friends this morning, and I'm glad I did. Relating my experience, strength, hope—and all the yucky stuff that goes with those things—was very helpful.

On a lighter note, Polly snapped some cool pics of Pablo and Grady last night. Here they are, with her captions (the actual skeleton image is courtesy CHLA Radiation Robot): 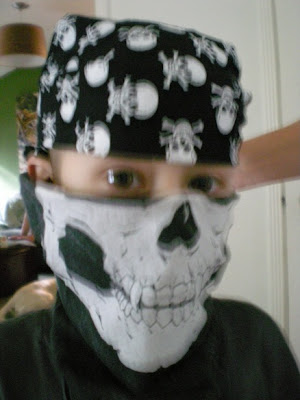 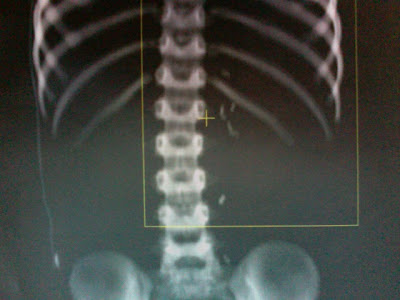 The real skeleton de Pablo, as photographed by the radiation machine at CHLA. 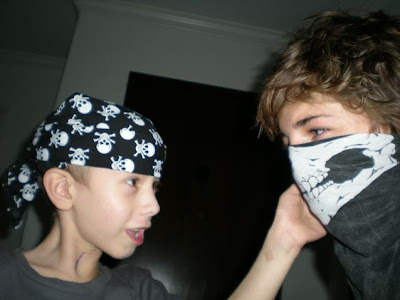 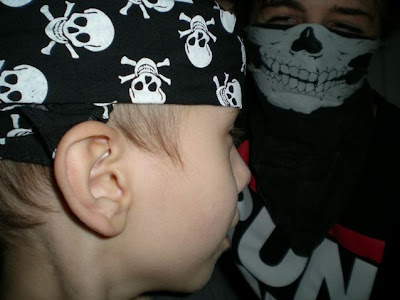 P and G in skulls 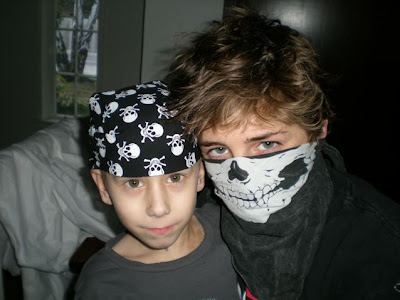 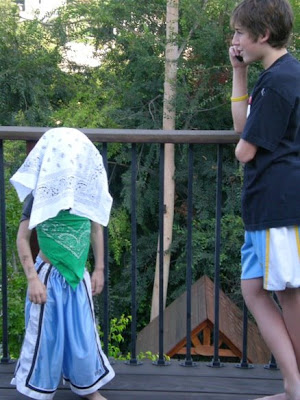 My 3-year old son Payton recently (6 months) finished treatment for stage II, diffuse anaplastic Wilm’s tumor at Cook Children’s Hospital in Fort Worth. My wife has been blogging about his/our experience as well (http://livinlifeintexas.blogspot.com/). I can definitely sympathize with what your family is going through. If you ever have questions regarding treatments, etc., or just want to talk with a fellow cancer parent, feel free to send me an email (clarson@uta.edu). I’m looking forward to the Give Listen Help CD. Sending positive energy your way.